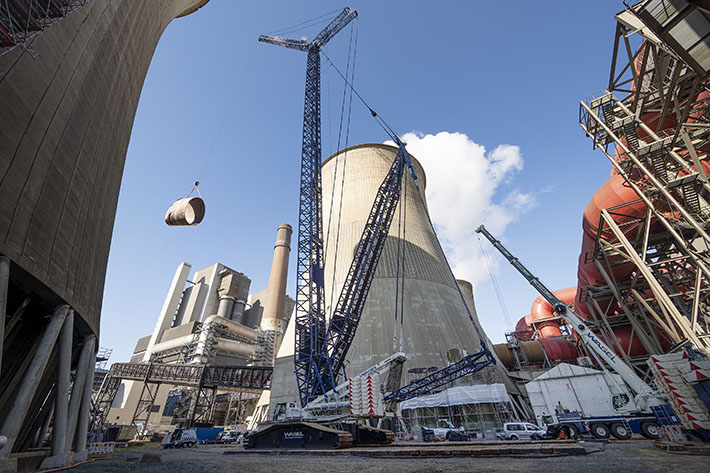 A Liebherr LR 1600/2 crawler crane was in action completing modification work in one of the cooling towers at Weisweiler power plant in North Rhine- Westphalia. Crane and heavy haulage logistics contractor Wasel based in Bergheim near Cologne received an order to replace parts of the pipework system over the top edge of the massive cooling tower. The crane was erected with an impressive roller head height of 182 metres to carry out this job.

Three days and 54 low loader journeys were required to erect the enormous crawler crane between the two cooling towers at the lignite power plant. Set up with its main 102 meter boom and a 78 meter luffing fly jib, the Liebherr crane hoisted the glass fiber-reinforced plastic components weighing up to 12 tonnes out of the power plant’s 117 meter high tower. The LR 1600/2 had to handle radii of up to 61 meters in the process. In fact, the Liebherr crawler crane required around half of the total of 525 tonnes of ballast used for the job just to raise and lower its impressively long lattice boom. The pallet with the suspended ballast was generally not required for the actual crane work. An additional 60 tonnes of ballast were used on the derrick boom for hoists involving a large radius.

There was no alternative to using the route over the opening in the internally hollow concrete body to replace the awkward components that make up the clean gas pipework. It was not possible to replace the pipe components using the only access point to the tower at a height of around ten meters as a result of their massive dimensions.

Manitowoc Cranes on display at MATEXPO 2019