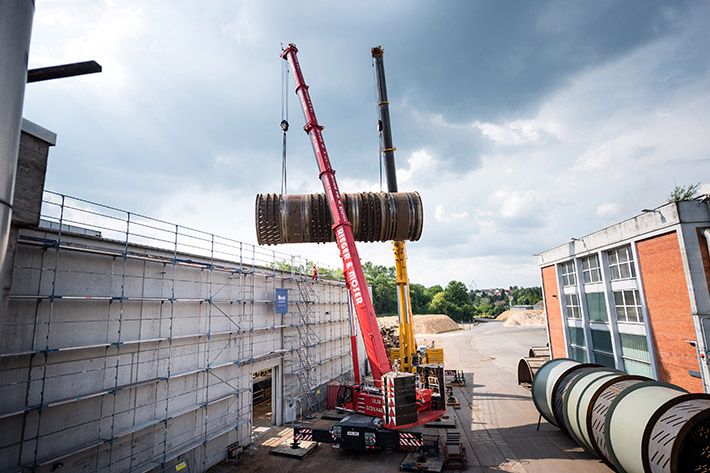 Teamwork in our home town – in June two Liebherr mobile cranes replaced a 20 year old debarking drum at the Sappi paper factory in Ehingen. This is also the location of the Liebherr manufacturing plant for mobile and crawler cranes. An LTM 1350-6.1 from Rieger & Moser and an LTM 1400-7.1 from Fricke-Schmidbauer worked together to carefully hoist the 90 tonnes load.

The roof of the factory building had been removed to replace the drums. The two cranes showed their sensitive side both when removing and inserting the heavy load. Firstly, the cranes had to lift the load evenly, and secondly, the long drum had to be guided through the gap between the two cranes. 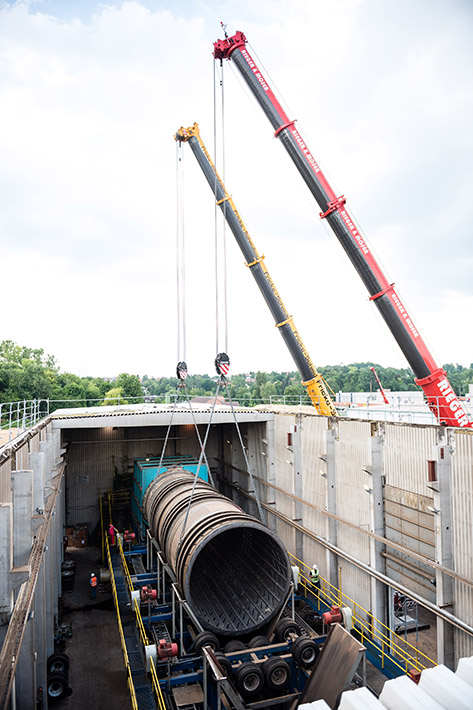 The roof of the building had to be removed to replace the debarking drum.

The new debarking drum is 32 metres in length with a diameter of 5 metres. Made up of a number of half-shells, it had been welded together over a period of several weeks on the Sappi factory site. Whole trunks of beech and spruce are rubbed against each other in the giant drum, causing the bark to fall off.

Rieger & Moser and Fricke-Schmidbauer are part of the Schmidbauer Group with a workforce of around 600. The whole group now has more than 20 outlets throughout Germany and runs 200 mobile cranes and 150 heavy haulage transporters.