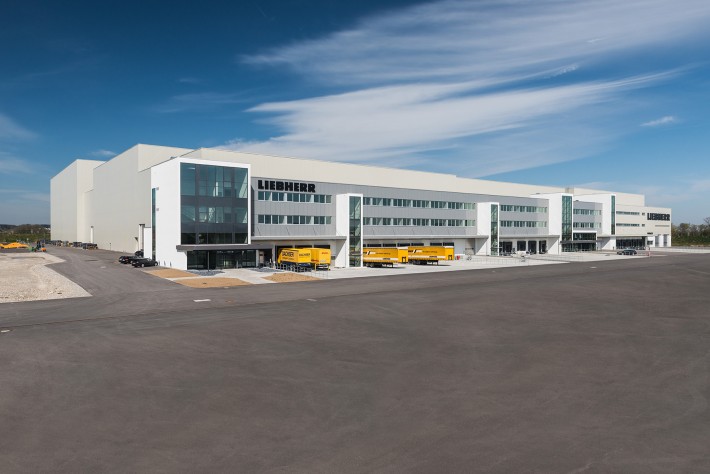 Germany: Crane and material handler manufacturer Liebherr has opened the first stage of its new logistics centre at Oberopfingen in south-west Germany. From here, the family-run company will serve its customers around the globe with spare parts; until recently, management of spare parts supply was more decentralised. ‘Our customers will now get their spare parts faster,’ comments Martin Barth, managing director of Liebherr-Logistics. ‘This important step guarantees that we will remain competitive in the future.’

The new central warehouse covers some 47 000 mÂ², about the size of six football fields, and provides space for around 100 000 different spare parts. Parts are taken into and out of stock in the automatic warehouse areas – which can be up to 36 metres high – using ‘energy-efficient’ operating machines. ‘Our warehouse technology and order picking systems make it possible to ship 1600 individual orders to many European countries – almost all of them on the day the order is received,’ Barth explains.

The location at Oberopfingen was chosen because it is next to the A7 motorway and within the immediate neighbourhood of the major production site for Liebherr’s earthmoving machines at Kirchdorf. Furthermore, it is not far from other plants within the construction machinery and components divisions in France, Austria and Switzerland.

In the final expansion phase in a few years’ time, the site will be extended to a total of 360 000 mÂ², equivalent to more than 50 football pitches, and hall space will be created to secure the logistics processes for coming decades. In the long term, the Liebherr Group is planning to merge the spare parts logistics of other construction machinery divisions at Oberopfingen.

Liebherr has opened the first stage of its new logistics centre at Oberopfingen was last modified: July 8th, 2015 by Ron Selby