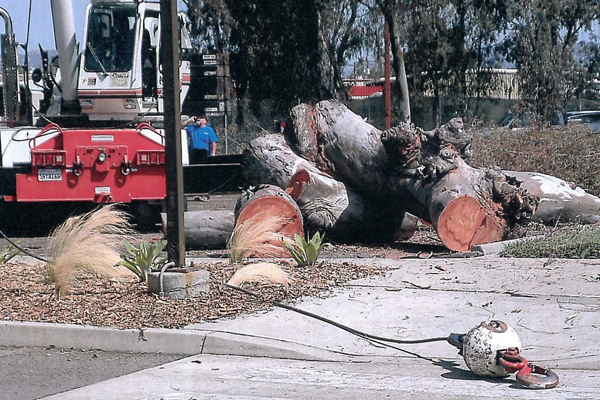 Safety gaps have been an ongoing concern with the North County Transit DistrictÂ over the last few years, and video footage obtained by inewsource documents a near-disastrous crane accident at a transit station in May.

The industrial accident involved NCTD and its subcontractor, Bobâ€™s Crane Service, which was hired to remove a eucalyptus tree from the Escondido Transit Center.

Not being experts in crane crashes, load balances or the weight of dead trees,inewsource asked Robert Nolen to examine the video. Nolen is co-owner of Bakersfield-based Safety Seminars Inc., a state-licensed accrediting agency. Heâ€™s been in and around cranes and construction for nearly 30 years.

â€œIâ€™ve definitely been getting a kick out of it,â€ Nolen said of the video. â€œThis is exactly what not to do in crane operations.â€

Taken from three different angles outside the Escondido hub, which serves as a commuter location for bus and light rail passengers, it shows several people mingling outside a bus pickup location shortly after the morning rush on May 12.

Between 50 and 100 feet away, an NCTD safety officer and crew watch their subcontractor attempt to remove a 20-foot section of a eucalyptus tree from its stump.

Then, according to the video and an incident description written two days later,

â€œWhile removing the stump, the crane lost control of the load, lifting the crane into a 45 degree angle, almost tipping completely over â€¦

â€œThe crane managed to crash to the ground staying in the upright position. There was extensive damage to the crane. The tree stump landed on an NCTD chain-link fence nearby, damaging the fence. There were no injuries reported. The operator claimed the computers in the crane shut off.â€

No one was injured in the accident, although there were several near-misses.

A 300 to 500 pound weight â€” attached to the line connecting the crane to the tree â€” flew skyward as the crane crashed down, sending safety workers running. A security guard tripped and fell in front of an oncoming BREEZE bus while escaping. The weight landed about 50 feet away from the bus (powered by compressed natural gas housed on the roof) and â€œsmashed on to the cement pedestrian ramp causing two round impressions and some spider cracking,â€ according to an NCTD email.

The fallen tree damaged 25 feet of fence and chipped a tile. The main contractor, Sing Group Inc., agreed to pay for the fence and the tile.

While Nolen did get a few laughs watching the footage, he said the accident was, in fact, very serious.

â€œI do a lot of work with oil companies,â€ Nolen said, â€œand thereâ€™d be guys standing in the unemployment line right now if thatâ€™d happened out on an oil lease.â€

Peter Melton, spokesman for Cal/OSHA, told inewsource, â€œThere is no regulation that requires the reporting of a non-injury crane accident,â€ and the government agencyâ€™s inspectors â€œcannot go on the record (i.e. on camera) about violations that may or may not be shown in a video.â€

inewsource reached out to NCTD spokeswoman Katie Whichard about the crane accident. She declined inewsourceâ€™s request to interview a manager without providing specific questions beforehand. But, she said, â€œSafety is NCTDâ€™s top priority,â€ and â€œNCTD took all the appropriate steps required by our agency to remedyâ€ the crane situation.

Two days after the accident, NCTD Executive Director Matthew Tucker sent a memo reminding all employees about the agencyâ€™s safety mind-set. The letter read in part:

â€œIt is imperative that we re-emphasize the importance of safety specifically as it relates to ensuring our operating practices, rules compliance, and maintenance practices are consistent with regulatory and industry best practices.â€

Nolen told inewsource the big question is who provided the â€œload rateâ€ to the crane operator â€” how much did that tree weigh and how much could the crane handle?

â€œThe lift planning for that was insufficient,â€ he said. â€œThereâ€™s no doubt about that.â€

Luckily, he said, no workers or bystanders were hurt by either the crane or the falling weight.

Despite safety precautions, Nolen said, â€œThose hard hats arenâ€™t going to do them any good with that crashing in at 500 pounds at terminal velocity.â€

For the past three years, inewsource has kept tabs on the safety problems at NCTD:

In February 2013, inewsource published an investigation into the agencyâ€™s security force tasked with responding to fatality scenes, reacting to calls for first aid and assisting in collision investigations. The investigation, prompted by the security guards themselves, found the officers were barely equipped or trained for any of those situations.

An NCTD audit prompted by the article confirmed the findings. The security company, Universal Protection Service, was given a second chance, but a second audit conducted before Universalâ€™s new contract took effect in February 2014 again confirmed a lack of training. The contract was cut before it renewed.
Then, in between the audits, NCTDâ€™s light rail service â€” the SPRINTER â€” was shut down for several months due to faulty brake rotors.

Former district employees, along with emails from the engineer who was once in charge of the SPRINTER, said the brake wear was noticed as far back as 2009 â€” just one year after the light rail began operations.

NCTDâ€™s Tucker told inewsource that the agencyâ€™s engineer, along with the maintenance contractor, â€œfailed to reportâ€ the brake problems after they were discovered. The engineer refuted that claim. Further inquiry found money that was set aside for SPRINTER repairs and upkeep in FY 2012 was instead used for funding more buses and studies in FY 2013.

NCTD demanded a retraction to the story but did not respond to inewsourceâ€™s point-by-point letter backing up its findings.

Robert Nolen described the weight attached to the crane line: â€œThe overhaul ball or slang term is a headache ball. Itâ€™s main purpose is whatâ€™s called overhaul. You need weight on the end of the rope so it can come off the rope.â€

The footage of the crane accident highlights an ongoing issue with the district â€” oversight of its contractors.

After Tuckerâ€™s arrival in 2009, the district laid off 80 percent of its employees and now relies almost entirely on private contractors to keep its trains and buses safe and running for the millions of passengers riding the system each year.

In September 2012, the consulting firm SC&H Group found serious problems with the way NCTD managed its more than 150 contracts, covering everything from construction to legal counsel to bus operations. The audit validated inewsourceâ€™s key findings during its investigation: that the transportation agency isnâ€™t effectively monitoring its contractors, and the effects are trickling down to San Diego County passengers and taxpayers.

Richard Katz, a former California assemblyman who sat on the boards of LAâ€™s Metropolitan Transportation Authority and Metrolink, read the SC&H report at the time and offered inewsource his opinion.

â€œItâ€™s hard to believe,â€ Katz said, â€œthat the board [of NCTD] is aware of all the things that this audit pointed out.â€

He added, â€œIf my board had seen something like this, theyâ€™d be making changes all over the place.â€

Another audit conducted that year found multiple deficiencies with NCTDâ€™s contractor responsible for providing bus service to the districtâ€™s disabled passengers. According to the findings, NCTD staff didnâ€™t monitor its contractorâ€™s drug and alcohol testing for its drivers, had no supervision in place for tracking bus performance, and didnâ€™t know where the contractorâ€™s office was located.

The audit found disabled passengers were waiting hours to be picked up after their workday ended and were being dropped off at their worksites hours early. This placed a liability on employers, who had to stay on-site to make sure employees made it to the bus safely, not to mention the stress it put on passengers, according to the report.

Two representatives from local businesses whose clients depend on the bus service toldÂ inewsource the contractorâ€™s performance improved after the audit.

NCTDâ€™s most recent federal audit â€” published by the Federal Transit Administration in May â€” found more deficiencies within the public transportation agency than at any point in its history.

The majority of the violations were in NCTDâ€™s procurement department, which is the department responsible for contracts and oversight.