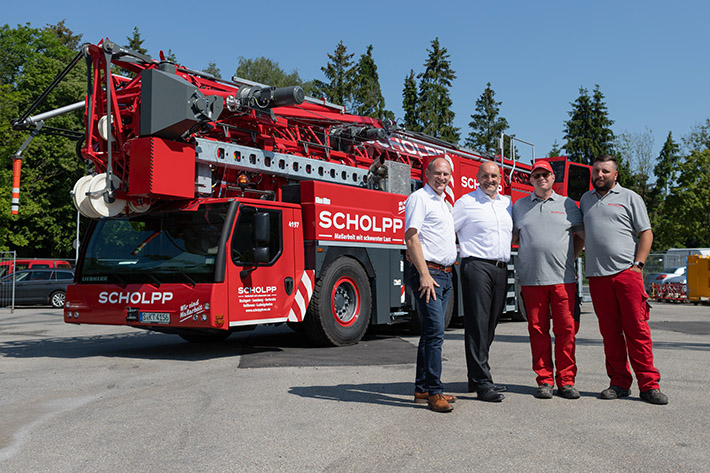 The handover of the crane company’s second MK 140 took place on the premises of the crane manufacturer. Jan Meißner, Regional Manager Rhine-Neckar and authorised signatory, has already had positive experience with the first crane, which can be operated in luffing mode as well as trolley mode: “The MK 140 has proved its worth for us in many ways. It is compact, powerful and flexible, it can be erected straightforwardly and is more user-friendly than most other cranes. Moreover, it works with exceptional speed,” says Meißner.

Only a few weeks after its commissioning, the mobile construction crane has already tackled its first jobs: At a hospital in Heidenheim, for instance, it exchanged the air conditioners weighing approximately one and a half tonnes, which had to be lifted 53 metres far into a narrow roof opening. Thanks to the Micromove fine positioning mode, the crane driver could position the air conditioners with millimetre precision by means of the radio control – with a perfect view of the load at all times.

The German crane company Scholpp Kran & Transport GmbH was founded in 1956, since when it has made itself an excellent reputation in the areas of crane and special transport. The approximately 175-employee strong company has mobile cranes of various types and different size classes in its fleet, including already six mobile construction cranes from Liebherr. With the purchase of the second MK 140 Liebherr mobile construction crane, Scholpp responds to the increasing requirements of its customers.