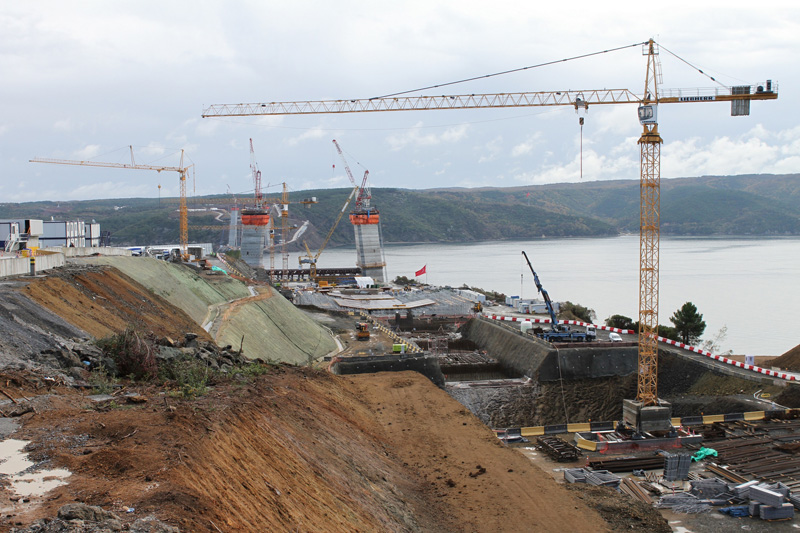 Five of the cranes are on rental from Liebherrâ€™s distributor for Turkey, Atilla Dural Mumessillik Insaat Turizm Tic Ltd, with the sixth being owned by Endem.

Construction began on the bridge, which is officially known as the Yavuz Sultan Selim Bridge, in May 2013.

When completed in 2015, the bridge will take eight lanes of motorway and two lanes of railway line across the Bosphorus, the stretch of water that separates the European and Asian landmasses, and which bisects Istanbul.

Designed by French structural engineer Michel Virlogeux and Jean-Francois Klein from Geneva-based T-Engineering, the bridge is being built north of the two existing Bosphorus bridges and is a cable-stayed structure with a total length of 1,875m (6,152ft), a width of 59m (194ft), and a height of 320m (1,050ft).

The central span will be 1,408m (4,619ft) in length; the ninth longest suspension bridge span in the world.

Six Liebherr cranes are being used by Turkish contractor Endem Construction at the site of the Third Bosphorus Bridge, where the company is building the road connections for the project.

The bridge is part of the projected 260km (160 miles) long Northern Marmara Motorway, which will bypass urban areas of northern Istanbul, while the rail system will be integrated with the Marmaray mass transit and the Istanbul subway.

A consortium formed by ICTAS of Turkey and the Italian firm Astaldi is building the bridge and motorway under a build-operate-transfer agreement. Hyundai Engineering & Construction is heading a joint venture that is building the lateral towers, aprons and suspension cables.

Endem Construction is responsible for building the viaducts, bridges and other connections for the bridge.

The 132 EC-H 8 is Liebherrâ€™s most popular crane in Turkey, used for its heavy-lifting capabilities and fast operating speeds, while the 120 K.1 combines the same maximum lift capacity with an ability to function in a limited space owing to its easy erection, a 45Â° obstruction avoidance angle, and a 30Â° raised jib working angle.