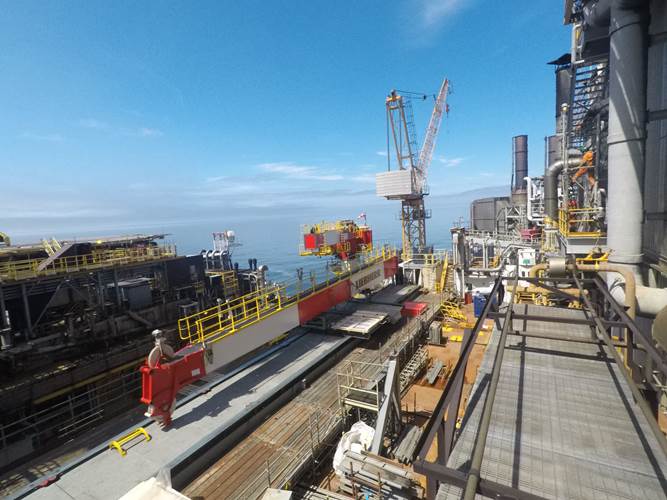 Liebherr’s maritime customer service is carrying out an extraordinary modernization project on Sakhalin Energy’s Molikpaq offshore platform off the Russian island of Sakhalin. Two ram luffing offshore cranes, type RL 1500 are going to be completely renewed. An existing crane, type BOS 1900 will be upgraded with the same generation control system as the RL 1500.

Molikpaq operated by Sakhalin Energy was the first Russian offshore oil production platform. Commercial oil production from the platform was launched in 1999. Since December 2008 oil from the platform streams through the trans-Sakhalin pipeline system to the oil export terminal of the Prigorodnoye production complex. After two decades of continuous operation, the existing three Liebherr offshore cranes now need to be renewed. Liebherr accepts this challenge and will completely replace two of the offshore cranes while the third device will be modernized for further operation. In terms of planning, logistics, technology and craftsmanship, this is an extraordinarily demanding conversion project. Several Liebherr companies cooperate with each other to implement the project. The contract drafting and signing were carried out by Liebherr-Russia OOO (Russia). Liebherr-MCCtec Rostock Gmbh (Germany) is responsible for the operational refurbishment of the platform. Liebherr-Werk Biberach GmbH (Germany) participates in the conversion with a tower crane which is used as a support crane for lifting large components. Since the start of the project in 2016, over 6,000 planning hours have already been invested in the project. 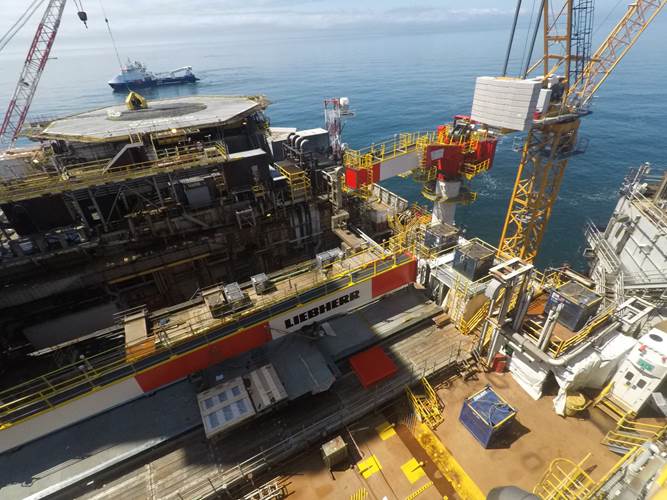 The replacement of the first crane (Liebherr BOS) with a brand-new Liebherr RL 1500 has already been executed from spring to autumn 2018. 24 Liebherr employees of various nationalities were involved in the realization of the first stage of the project. In order to be able to move large parts on the platform, Liebherr installed a tower crane of the type 230 HC-L 8/16 Litronic to be used as a support crane. In addition, a special sliding system was designed and built by Liebherr´s customer service team to move particularly heavy components and modules over the platform. The extreme weather conditions and limited space on the platform demanded full concentration and professionalism from the involved Liebherr staff. The entire conversion project is planned to be completed by the end of 2020.

The second phase, the modernization of the existing BOS 1900, has also already been finished. The main reasons which triggered this modernization was to have the same software and handling for the crane operators as the two new RL 1500. A further reason is to use as far as possible the same control system components in the modernization as used for the new RL 1500. This increases the spare parts interchangeability and availability. Additionally it reduces the spare parts storage costs.

The third phase will include the installation of the second ram luffing crane until the end of 2019. Both RL 1500 cranes are characterized by a cylinder luffing box boom design and a diesel-hydraulic driven main engine. Considering the project specifics, the cranes can handle loads up to 65 tonnes. That means 25 tonnes more than the standard lifting capacity of Liebherr RL 1500. This customized solution has been ensured by providing a three fall reeving. Equipped with a main and an auxiliary hoist the RL cranes have a maximum outreach of 42,6 meters. This makes them an ideal solution for general purpose applications such as maintenance work or lifting supply.

In order to take the environmental conditions into account, the cranes are equipped with an arctic temperature package which allows operation down to -36°C. Another feature of these ram luffing cranes is the large and comfortable cabin. Upon customer request a mid-sized cabin with 10 m³ is installed.

To both avoid heavy loads and thereby ensure easy handling of components onsite, the box boom has been split into two pieces. After mounting the pivot piece to the column, the second boom section has been assembled via bolted connections.