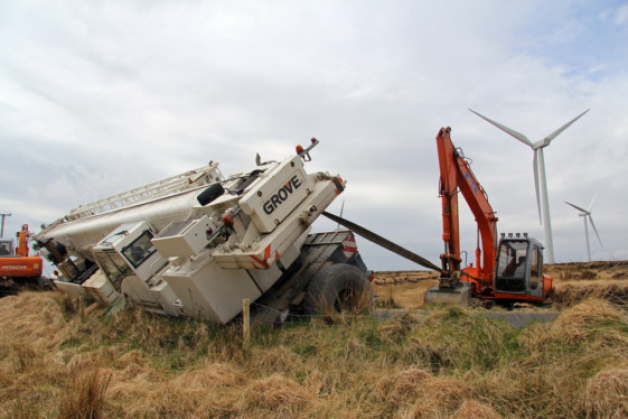 The crane which had been working at the Wind Farm toppled on itâ€™s side as the road gave way. The owner of the Crane Mark McKinney of McKinneyâ€™s Crane Hire was on site this afternoon and told the Donegal Democrat, â€œThere has been a considerable amount of damage but thank God nobody has been injured.â€

At least four diggers have been at work throughout the day in an effort to remove the large vehicle.

The large crane which toppled over at Croag, outside Dunkineely yesterday afternoon. 1704 INDD 1a Crane MVB.JPG (Pic; Matt Britton)

Cllr. Brendan Byrne who visited the site this afternoon said, â€œClose consideration should be given to the location of these sites in relation to road networks and the possible weight of potential vehicles using access.

â€œI hope that this will not inconvenience the people living in the area tooÂ much.â€