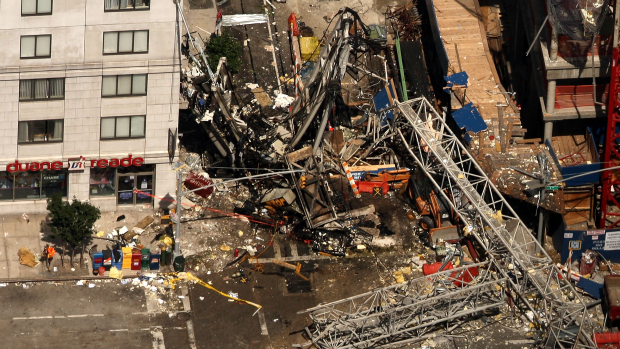 The judge said Friday that because the owner of New York Crane and Equipment,Â James Lomma, is in the hospital and could not attend court proceedings, the trial would be postponed until September, CBS 2 reported.

Opening statements had been underway for days when James Lommaâ€™s lawyers asked Thursday to halt the trial, saying he had been severely hurt in a wreck before jury selection concluded last week. Attorneys for the workersâ€™ families pushed to continue the trial, but Manhattan state Supreme Court Justice Manuel Mendez said Friday he felt he had no choice but to stop it.

Lomma suffered multiple fractures in a multi-car wreck May 20, was hospitalized immediately, has had several surgeries, and isnâ€™t expected to be able to come to court for two to three months, Mendez said after seeing a police accident report and talking to Lommaâ€™s surgeon.

â€œIt is only fair to allow Mr. Lomma â€” to be present at trial,â€ Mendez said, saying Lomma had been â€œincapacitated through no acts of his own.â€

While Lomma wasnâ€™t required to be at the civil trial, his lawyer had argued that he was a key witness and that his absence would harm his defense.

As the workersâ€™ relatives -Â some of whom had flown in from Kosovo -Â looked on with tears and sighs, their lawyers urged the judge to keep the trial going and see how Lommaâ€™s condition progressed. They asked to have another doctor assess his recovery timetable, and they suggested the defense had played a tactical game by not revealing Lommaâ€™s hospitalization before hearing the familiesâ€™ case outlined in opening statements.

Lawyer Susan Karten said the families might appeal Mendezâ€™s decision. In the meantime, the judge dismissed the jury and set a Sept. 9 date to start over with new jurors.

Construction workersÂ Donald Leo and Ramadan KurtajÂ were both killed when the 30 ton craneâ€™s cab separated from the tower mast and fell 200 feet to the ground, CBS 2 reported.

Their families are suing various companies and agencies but largely blame Lomma. They say he got an inexpensive repair to an important crane component that failed and caused the collapse.

Lommaâ€™s lawyers have said others were at fault. He wasÂ acquitted of all chargesÂ in a 2012 criminal trial.

Debris is scattered on the ground at the scene of a crane collapse on Manhattanâ€™s Upper East Side at 91st Street and 1st Avenue May 30, 2008 in New York. (Photo by Spencer Platt/Getty Images)