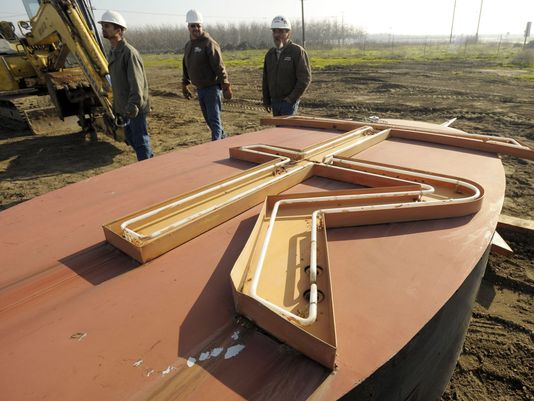 The Ranch was an important ag producer, sending peaches and other fruit to the East Coast. At one point, Tagus Ranch had its general store, a school and a post office.

More recently, the building that once hosted the Tagus Ranch store became a night club.

Demolition experts from Bryan Company, using a massive crane, took down the sign as part of a demolition project that started last month and was delayed because of the holidays.

The demolition was completed because the county deemed building a nuisance.

Malli, who has owned the property for a decade, said he plans to develop the area. But there are several upcoming projects â€” the widening of Highway 99 through the area and the reconfiguration of Avenue 264 highway access â€” that he would like to see done before he starts.

In the meantime, Malli said he is sacing the sign’s top portion, an intertwined capital “T” and “R” and a segment that reads “World Famous.” The rest was taken away in large metal containers.

The sign had appeal for locals. A Times Delta Media Group video posted on social media was viewed 7,000 times by midafternoon. On Twitter, locals reacted as well.

Brent Keaster wrote: “As a Visalia native, this picture is saddening.”

Motorists traveling on Highway 99 also noticed the removal. Several passing big-rig tractor trailers honked their horns as they passed by. Other drivers slowed to take a look at the activity.

With Classen’s Crane Service, A Lyndon Church Gets New Life