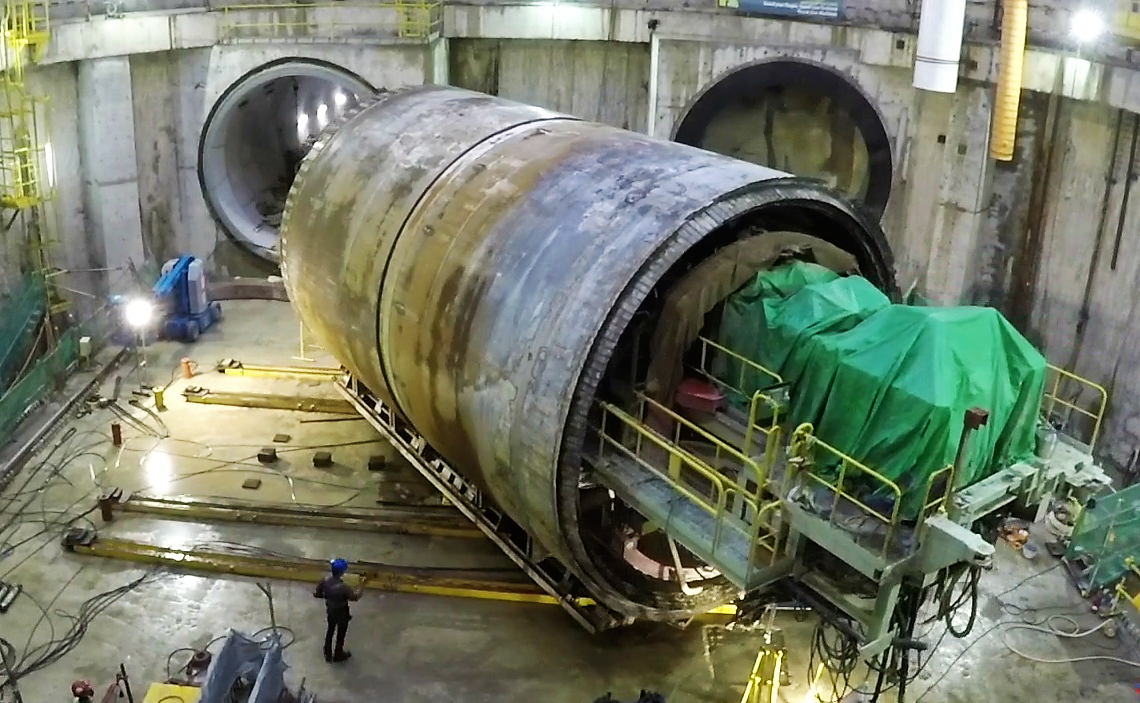 At the site of the Gardens By The Bay Mass Rapid Transit Station project in Singapore, an underground station is being constructed on the Thomson-East Coast Line in Marina South. Yu Sin Engineering Work Pte Ltd used tunnel-boring machine (TBM) at the subway project. Manufactured by Hitachi Zosen Corp., it measured 22 feet in diameter and weighed 570 tons. It had completed an initial 2,225-foot tunnel and needed to be repositioned to begin its next boring assignment.

Yu Sin Engineering used a Hydra-Slide HT300 heavy track hydraulic skidding system and TT900-10 engineered turntable to move and rotate the TBM 100 feet underground. After two days of preparation work and planning, the actual rotation was completed in just one hour by skidding it onto the turntable, jacking down, and rotating 180 degrees.

Jefferson Yee, general manager of Yu Sin Engineering Work Pte Ltd, said: “Initially the plan was to dismantle and re-launch [the TBM], but this would have taken a long time and we wanted to explore the option of a U-turn. After consulting with Hydra-Slide on the technical possibilities we proceeded with the alternative option, which resulted in a huge time savings.”

Prior to the rotation, the HT300 slid the TBM 40 feet using four rails and four push cylinders to increase the HT300’s overall capacity. The system’s standard track lengths are 10 feet and 19 feet, but Hydra-Slide can customize track lengths to suit almost any requirement. The tracks are connected by a simple lug and pin set and can be leap-frogged to slide longer distances.

The HT300 remained in place while the rotation was completed in one continuous motion, with the turntable cylinders automatically resetting into ratchets after each push. The TT900, which had already been lowered into the shaft using a 250-ton capacity crawler crane, is more commonly used to turn transformers or generators during handling or installation, but it is suited to rotation of any heavy or oversized loads and Yee reported that it demonstrated its versatility and reliability.

“We were familiar with the HT300 after the first sliding operation, but the TT900 proved to be just as fast, safe and easy to operate,” he said. The TT900-10, ordered by Yu Sin this spring, is a modification of Hydra-Slide’s TT500-10, designed to accommodate extra cylinders and rotating force. It was shipped to Singapore in an open-top container via sea freight.

“It is a simple system to operate,” said Janine Smith, vice president at Hydra-Slide. “We have designed our turntables with the same safety principles as our skidding systems: there are no winch lines or holdbacks required, the push cylinders automatically reset into specially designed ratchets on the side of the turntable, and there is no manual handling of any components required during operation.” Smith said to her knowledge, it is the first time the turntable has been used underground on a tunneling project.

The tunnel boring is scheduled to completed by the end of 2017.