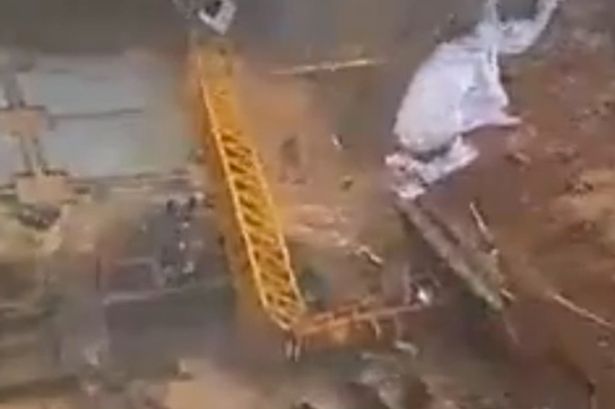 The footage, caught on CCTV, shows the crane collapse down into the building site below, a car was damaged as it hit the ground, but no-one was injured.

This is the moment a huge crane comes crashing down as high winds and rain batter a city.

The devastation is caused as the heaviest rain storm in six decades hits southern China.

The footage, caught on CCTV, shows the crane collapse down into the building site below at Dahua County, in the Guangxi Zhuang Autonomous Region.

The crane tower, which stood at over 30 metres high, damaged a car as it hit the ground, but no-one was injured.

The floods, across the region, have left one person missing with dozens more waiting to be rescued from their homes.

The video of the crane collapse has been viewed more than 75,000 times online.

Back in London, last year, a workman had a lucky escape after a crane arm collapsed above a luxury building development.

The 35-year-old operator was rushed to hospital after being treated at the scene for a head injury.

Police put a cordon around the building site amid fears the counter-weight could also fall.