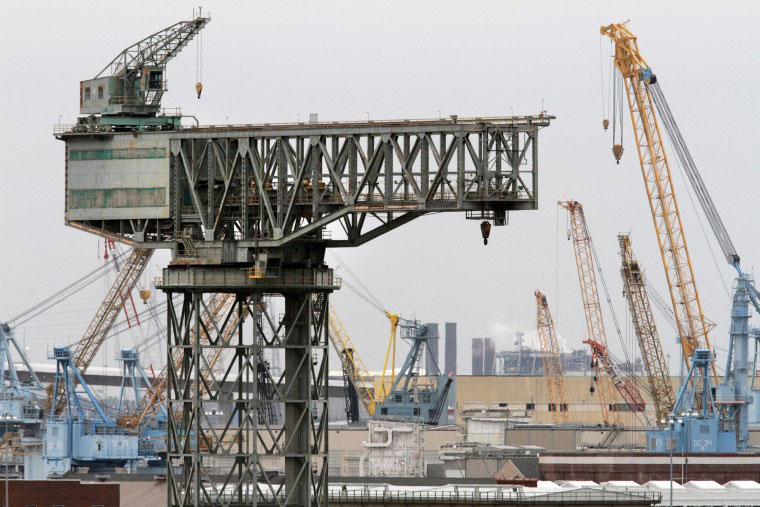 A print of the Norfolk Naval Shipyard’s hammerhead crane hangs over Lester Lipford’s bed. /// It was a gift from his friend, local artist J. Robert Burnell, who painted the mighty machine as it looks from the Elizabeth River. /// The hammerhead has loomed over Portsmouth’s waterfront since World War II, standing like a monument to the thousands of shipyard workers whose efforts on the homefront helped win victories at sea.

For the 86-year-old Lipford, it represents that history and more. It also reminds him of some of the best years of his career.

The retired crane operator can still see in his mind that panoramic world he watched for years from his perch high up on the crane.

He could see well over 12 miles in all directions.

“You see all these ships and all the boats and tugboats,” he said. “There was always some kind of activity up and down the Elizabeth River.”

Lipford loved his view. He could see every type of yacht money could buy making its way down the Intracoastal Waterway.

All of it was breathtaking. But the job didn’t come overnight.

He first climbed into the cab of a crane as a young man in the Air Force. He was in Germany during the post-World War II occupation and helped move food and supplies during the Berlin Airlift of 1948.

By the time he left the military, he had found his calling.

Back in the states, the Tennessee native easily found his place on big construction jobs.

He first came to Hampton Roads while helping to build power stations for what was then the Virginia Electric Power Company. By the early 1950s he was working on the first tunnel from Portsmouth to Norfolk.

“We were doing clam shelling and drag line work and digging foundations with the clam shell,” he said.

Lipford met his wife, Katherine, during that time. She was a foreign exchange student from Cyprus.

They were married in 1953. Eight years later, he decided to take a pay cut and join the shipyard workforce so he would have better hours and more time for their family of four.

Lipford didn’t know much about the hammerhead when he first went through those gates.

“When you first go in they send you around with operators that are already familiar with the cranes.” They went from crane to crane so the new people would be familiar with all of them, he said.

He got a chance to work on the YD-26, a 150-foot floating crane that had been converted from steam to electric.

“It was an engineering piece of work, I tell you.”

But the Hammerhead Crane 110, as it’s named, was his favorite, Lipford said.

Operators took an elevator to get to the cab of the hammerhead and there was a railed walkway all the way around it.

Getting to the smaller 15-ton crane on top – the one they called the “pig” – meant going up two more flights on an open stairway, he said.

His first trip to the pig was one of the more terrifying moments of his career.

“It was late at night and it was stormy,” he said. The wind was blowing hard and he definitely had to hold onto the railing, he said. The smaller crane was mostly used to set antennas on ships.

The cab of the hammerhead itself had room for two operators, Lipford said. It was enclosed with glass windows and heated, but not air conditioned. So windows were open on warm days.

Most of the work they were doing then was lifting nuclear components into a nearby storage building whose roof could be removed.

The 5-million-pound crane is designed to lift 350 tons, but is tested at even higher tonnage, Lipford said.

During World II it was used to lift gun turrets onto ships, among other things. Lipford said it was also used to lift the stacks of heavy armor plates that went onto ships to protect them from torpedoes.

“The engineers that came up with the idea saved many lives,” he said.

His work on the hammerhead gave him an appreciation for the men who came before him and the crane’s role in the shipyard’s history.

But the crane has not been used since 2001 and the Navy is weighing the pros and cons of preserving it or tearing it down.

Michael Brayshaw, a shipyard spokesman, said the staff of the Virginia Department of Historic Resources will be among those consulted.

Public meetings have not yet been scheduled, but Brayshaw said they will be.

“The decision process will be very public,” he said,

Lipford won’t be alone among people who don’t want to see the hammerhead disappear from it’s reign on the waterfront.

Pins were made of the crane in the 1990s to promote the shipyard’s heritage.

Lipford has two of the small golden replicas. And he has his print.

He remembers Burnell telling him he painted the hammerhead because it was one of the outstanding features of the shipyard.

People see it coming from Norfolk and Chesapeake or coming into the gates, Lipford said.

“I would love to see them preserve it in some fashion,” he said. “It is a landmark – and a historical landmark at that.”