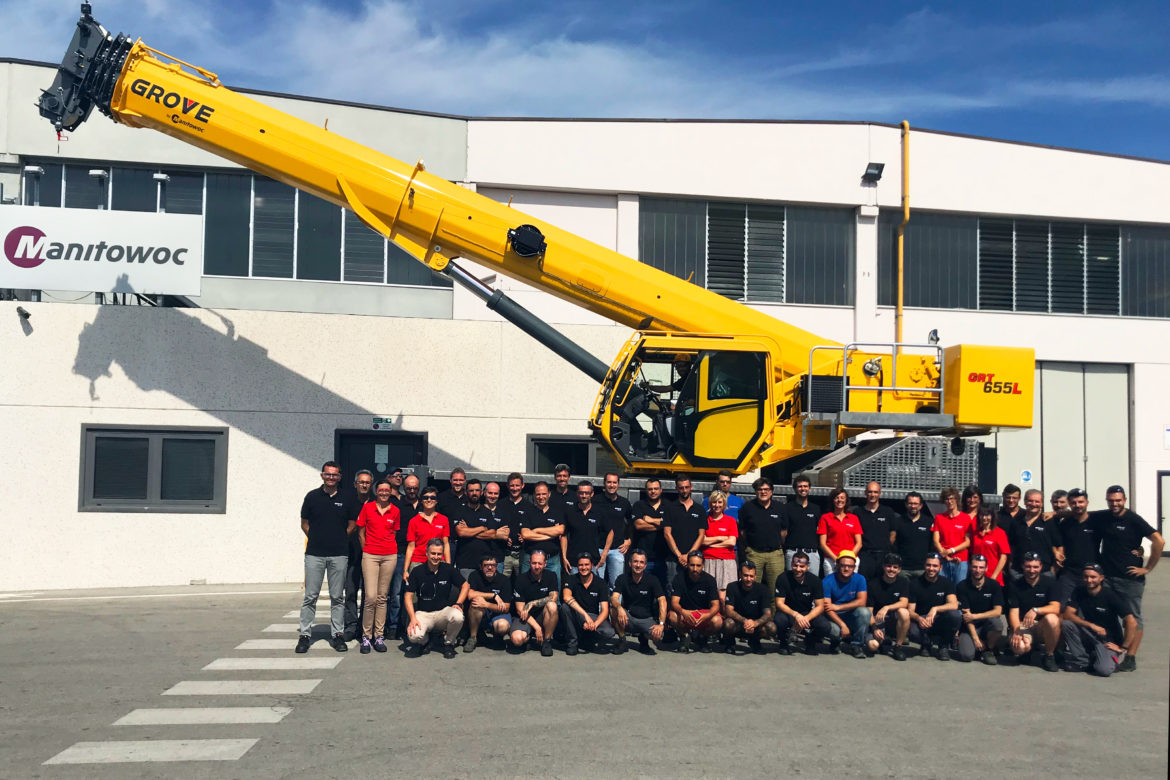 The first Grove GRT655L and GRT655 rough terrain cranes have been assembled at Manitowoc’s Niella Tanaro plant. The news comes almost exactly one year after it was announced that GRT880 and GRT8100 rough terrain cranes would begin production from the Italian factory – the first to be produced outside of Shady Grove, Pennsylvania, USA. What’s more, given the success of the production of GRT8100 and GRT880 models from Niella Tanaro, Manitowoc has decided to expand the product portfolio of its European production.

Since 2005, the Niella Tanaro factory has manufactured and shipped more than a thousand rough terrain and small all terrain cranes around the globe, including the RT530E-2, RT540E, RT550E and, most recently, the GRT880 and GRT8100 models.

“This is a logical decision based on the success that we achieved over the last year with the production of the GRT880 and GRT8100,” Giorgio Angelino, senior vice president for mobile cranes in Europe and Africa, explained. “We received a very good response from our customers in Europe, Africa, Middle East and Asia Pacific in regards to models that were localized in Niella Tanaro. We are also getting enthusiastic feedback from the field, so we are confident that the customers will benefit greatly from this latest decision also.”

The benchmark in their class

Federico Lovera, product manager for Europe, Africa, Middle East and Asia Pacific Regions, said: “The GRT655 can be considered the standard boom length option and is ideal for construction and maintenance companies, while the GRT655L is the longer boom option and is widely considered a ‘must have’ for rental companies. Both models feature class-leading capabilities, Manitowoc’s Crane Control System (CCS) and a tiltable cab. These are in addition to the features that our customers have come to expect and that have led our rough terrain cranes to provide the best ROI, such as inverted outrigger jacks, hydraulic disc brakes, load sensing hydraulics and an ECO mode to reduce fuel consumption”.

Thanks to an optional 7.9 to 13.7 m telescopic boom extension, the GRT655L has the best-in-class reach of up to 59.7 m, while the GRT655 offers a max reach of 51.8 m. Additionally, the GRT655 and GRT655L can both be equipped with 18-inch tires, so that the max width of the machine is less than 3 m, making it fully compliant with logistic requirements in Europe.

The GRT655L will make its debut in the Italian market at GIS (Giornate Italiane del Sollevamento), an exhibition for lifting equipment taking place in Piacenza, Italy between 3–5 October, 2019.