From five to none as Govan crane era ends 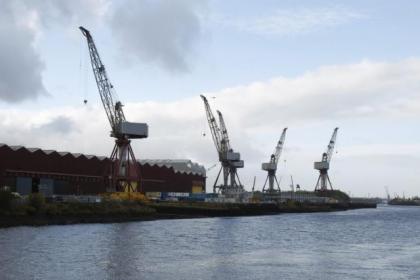 Four have already been removed and workmen are expected to completely dismantle the fifth and last portal crane before the end of next week.

The entire operation to remove the giant iron cranes will have taken less than three months.

The 80-ton structures were erected in 1974 and were routinely used on a range of shipbuilding programmes over the decades.

They were last used in May 2008 after shipyard bosses at BAE Systems decided to decommission them.

The stationary cranes had been used to help build some of the deadliest warships in the world, with the new generation Type 45s destroyers being their final assignment.

A yard spokesman said: “The cranes reached the end of their design life and have now been replaced by mobile cranes, which are safer and more efficient for the construction of complex warships.

“We have five mobile cranes on the Clyde that can be moved between Govan and Scotstoun when required. In addition, the ship build halls have their own electric overhead travelling cranes.

“We are capturing living history through projects documenting the experiences of current workers in the yard, along with 3D modelling of the Govan yard and the cranes.

“We have also salvaged and donated sections of the cranes to the Fairfield Heritage Centre in Govan and the Maritime and Riverside Museums.”

Dismantling work comes amid speculation the Govan facility will be axed in a few years in favour of a new Â£200million “frigate factory” at Scotstoun.

BAE Systems announced plans in November to cut 825 jobs at its yards in Scotland.

An announcement on the future of the Govan yard is likely in the summer.

From five to none as Govan crane era ends was last modified: March 5th, 2014 by Ron Selby