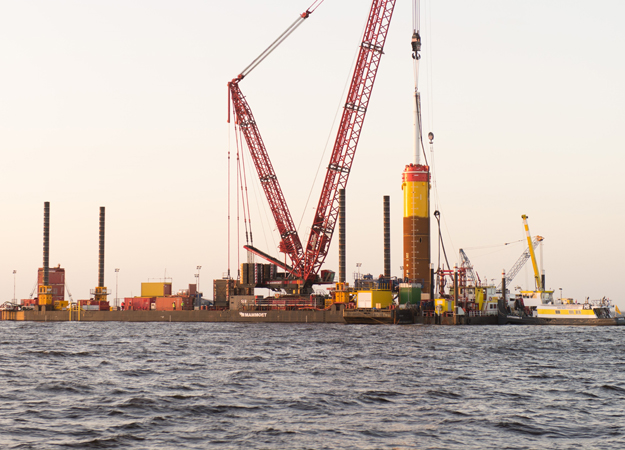 MThe first turbine foundation is in place at the 144MW Westermeerwind nearshore wind farm in the Netherlands.

Van Oord and MammoetÂ are tackling the job and the installation of the first of 48 units(pictured) followed ramming work in the Ijsselmeer and transportation of the monopole from Vlissingen.

The project will feature Siemens 3MW turbines sited between 500 and 1100 metres from the dikes of the Noordoostpolder.Â The monopiles are 35 metres long, weigh about 250 tonnes and have a diameter of five metres.

Depending on the weather, one foundation should be installed per day, said developer Westermeerwind BV. Piling takes two to three hours and is expected to take place mainly in March and April.

Installation of the electrical cables in the Ijsselmeer kicks off in May. First power is expected in late July or early August.Â The entire wind farm is slated for completion by mid-February 2016.