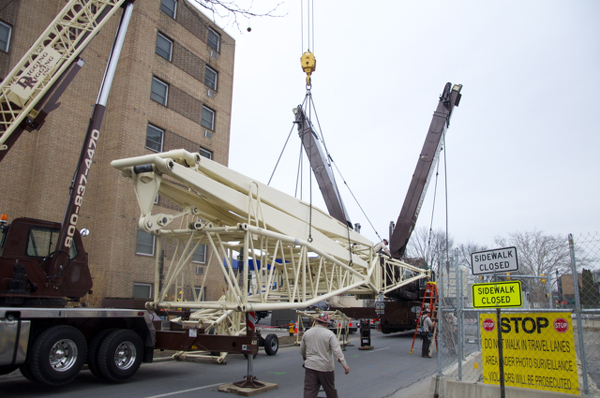 College Avenue from Atherton Street to Barnard Street will be closed until crews finish their work on Wednesday, according to a news release from Metropolitan developer Penn Trust Properties. PennDOT has set up a detour that will avoid the work zone using South Atherton Street and Whitehall Road.

Digging & Rigging crew member Aaron Gregory says he and his coworkers are â€œbasically putting a crane together, piece by piece, backwards.â€ And then theyâ€™ll have to do it all again.

It’s a confusing process that actually takes some intricate maneuvering to accomplish.

The process starts with a crane thatâ€™s small enough to drive on public roads, and a second, larger crane that can only be driven around with some of its major parts removed. Gregory says the first step is using the smaller crane to add a boom, stabilizing outriggers and other parts onto the second crane.

Then the first crane is then used to load parts of a third, even larger crane, onto the flatbed of a tractor-trailer, which backs up in front of crane two. Crane two then picks up each of those individual parts and stacks them up over the course of several hours, creating the third crane.

But their work still isnâ€™t done. From there, Gregory says they can finally use the third crane to start on the main job: erecting the second tower crane, which will eventually stand several stories tall.

Gregory says that his crew has go through this convoluted process because the first two cranes arenâ€™t big enough to build the tower, and the third crane that is big enough is too large to be transported to construction sites in once piece.

â€œYouâ€™re probably looking at maybe 22 or 23 hours, all told,â€ Gregory says. â€œYou figure at least four hours to assemble everything, a good ten to twelve hours to stack the tower, and then a few more hours to disassemble everything.â€Gregory says the job can be done with as few as four people, but ten crew members are working on the Metropolitan crane to speed things up. He says the process is time-consuming, but after doing it for twenty years â€œitâ€™s practically second nature at this point.â€

He expects to work about 12 hours on Tuesday to have the tower crane finished before Wednesday, and to have everything out and the road reopened by Wednesday evening.

â€œThis is nothing we havenâ€™t done before,â€ Gregory says. â€œNothing we canâ€™t handle.â€

The Metropolitan, when finished, will be a 12 story building with retail space on the first floor, office space on the second and a mix of high-end student and professional housing on the remaining floors. Construction is expected to wrap up sometime next year. 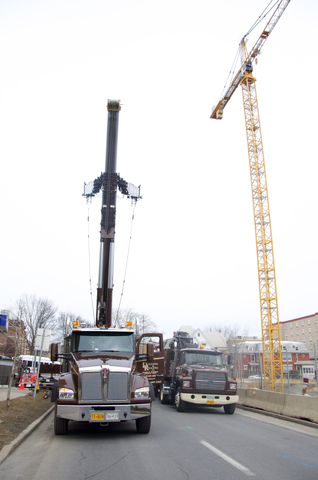 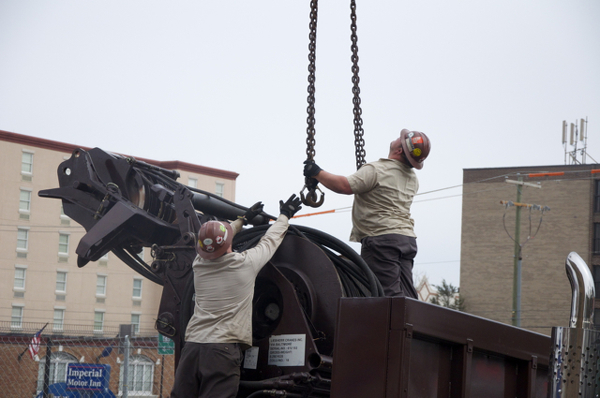 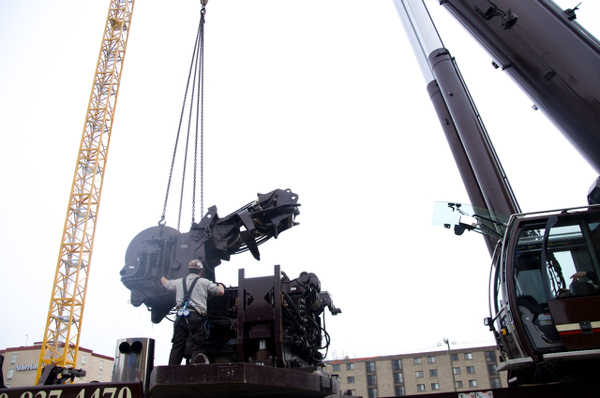 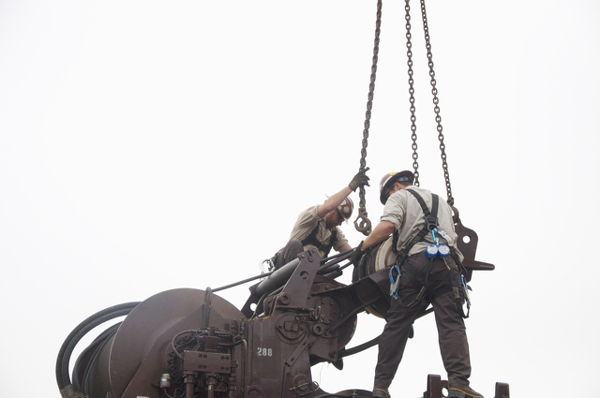 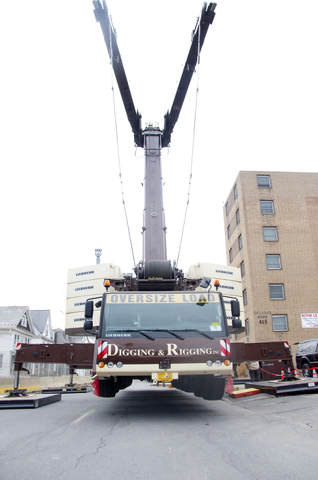 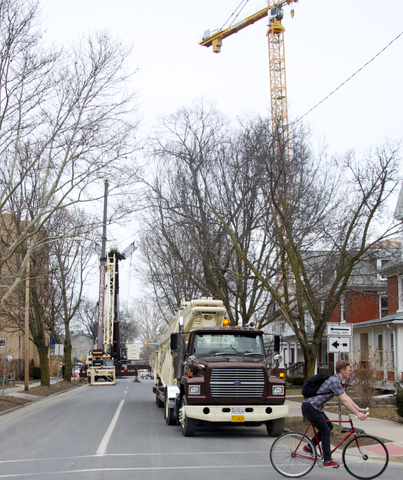 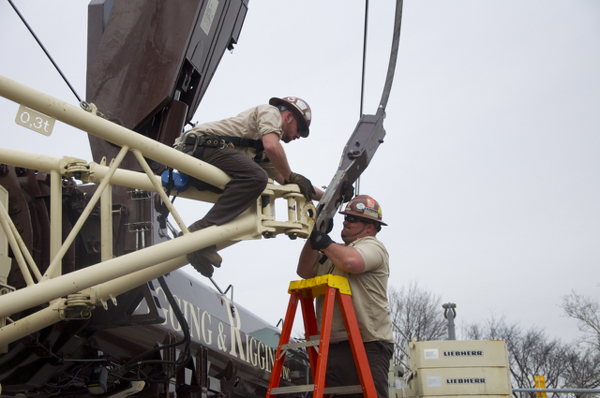 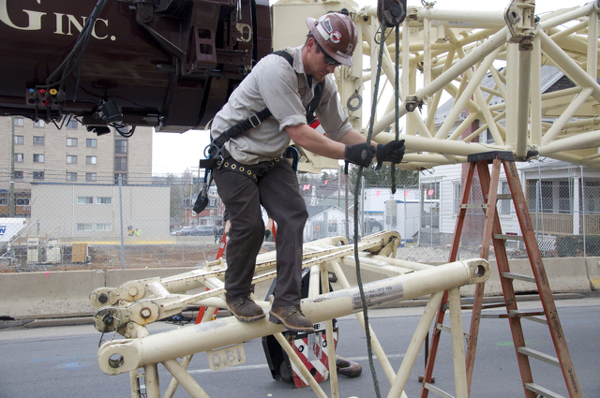 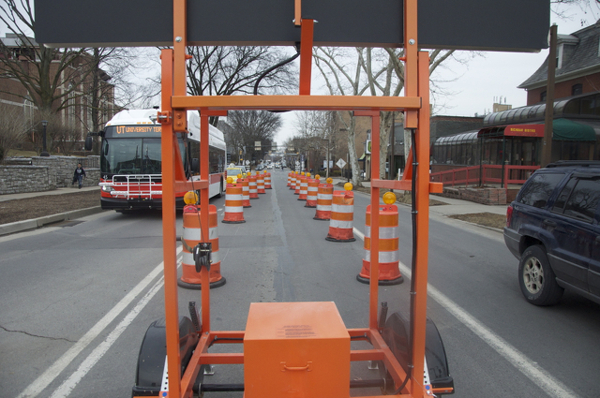 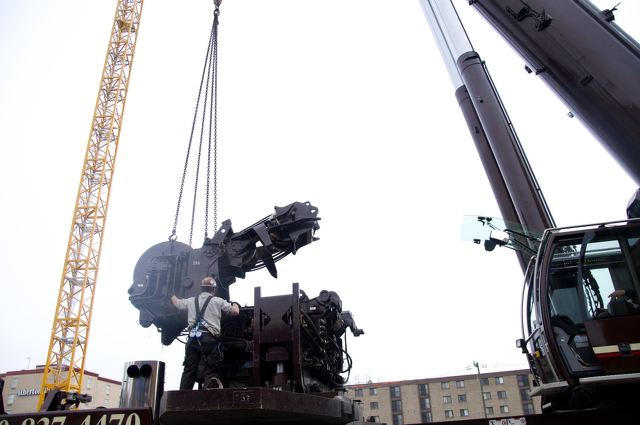