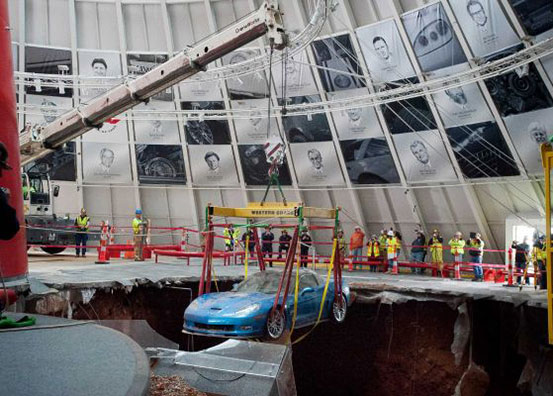 Workers in a cage painstakingly hooked straps around the cars before a crane slowly hoisted them one by one from the enormous pit that opened up last month. Onlookers cheered after each car was rescued, but the joy was more subdued for the second car, which had more extensiveÂ damage.

Workers were able to get that car running. Cheers went up as the engine revved at theBowling Green museum.

Doran said the car was in “remarkably good shape. You could have that car back on the road in a couple ofÂ days.”

Not so for the other car retrieved Monday, a 1993 Ruby Red 40th Anniversary Corvette. The body panels and window glass need replacing, but the vehicle is salvageable, DoranÂ added.

The frame looked to be “pretty straight,” the underbody appeared intact and the steering gear worked, he said. “Mechanically, it looks to be in remarkably goodÂ shape.”

Chevrolet will oversee restoration of all eight cars swallowed up last month when the earth opened beneath a display area while the museum was closed. No injuries wereÂ reported.

As the rescue operation began, workers in a cage were lowered to hook straps around the cars before they were hoisted out. The hole is about 40 feet across and up to 60 feet deep, said museum spokeswomanÂ Katie Frassinelli.

Next up is a 1962 black Corvette, which workers hope to recover as early as Tuesday, FrassinelliÂ said.

The museum cautioned that removing the black Corvette will be much “trickier” because a huge concrete slab is partially resting atop part of that car. Two cranes will be used to lift that car and theÂ slab.

The other five cars will remain buried until workers further stabilize the sinkhole, Frassinelli said. That work could take two or three weeks, she said. Strode estimated the recovery could take until mid-April.

The museum plans to display the damaged cars through Aug. 3. The vehicles then will go to a Michigan plant forÂ repairs.

The eight cars are widely believed to have a total value exceeding $1 million, the museumÂ said.

Sinkholes are common in the Bowling Green area, which is located amid a large region of bedrock known as karst where many of Kentucky’s largest and deepest caves runÂ underground.

The museum is open except for the area where the sinkholeÂ occurred. 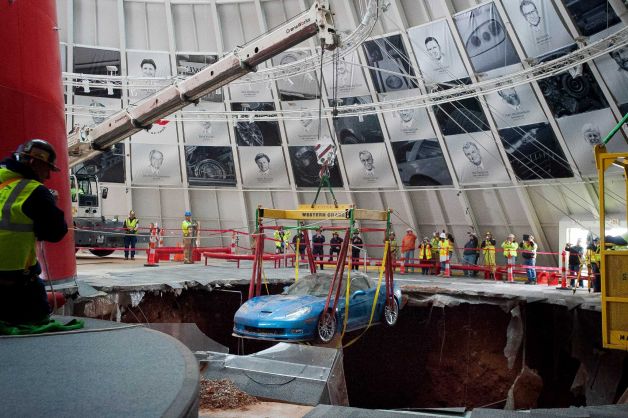 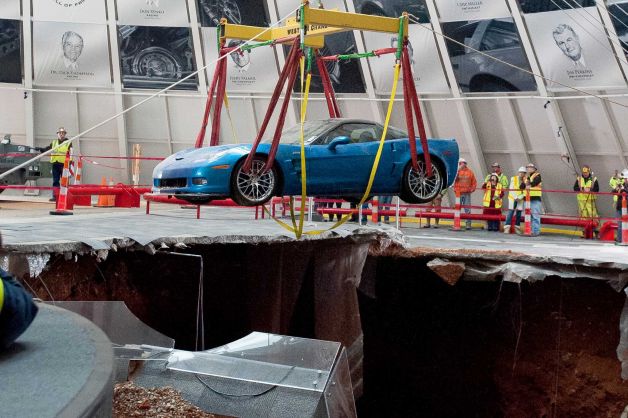 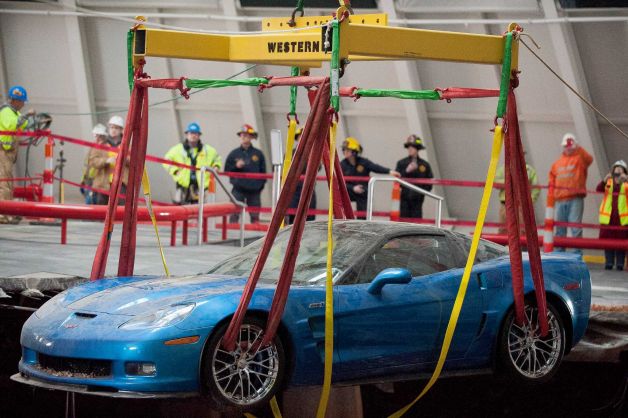 Return of the cranes to Oregon St.