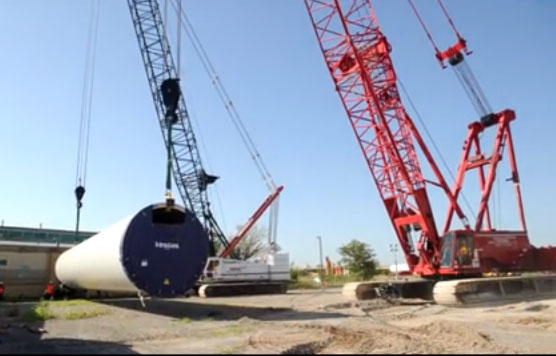 Bits and pieces of the areaâ€™s next wind farm began rolling out of the downtown rail yard and down North Texas highways Tuesday headed forÂ Jacksboro.

Josh Provo, field manager for Casper, Wyoming-based crane, rigging and heavy haul company Energy Transportation Inc., said crews began loading and hauling sections of towers and blades for delivery to theÂ KeechiÂ Wind Project in Jack County. Tower sections and the massive blades have been delivered and stored at the rail yard since June, he said, and the company anticipates being in Wichita Falls through December.

Itâ€™s cheaper forÂ Vestas, the manufacturer of the wind generators, to use railroads rather than trucks to get their product close to the site where they will be built, he said.

The original site for unloading and distributing the massive wind generator pieces was picked about 20 miles north of Wichita Falls, he said.

But it made more sense to use the yard in Wichita Falls because of the services Wichita, Tillman & Jackson Railway Co., managers of the Wichita Falls rail yard, could provide on site.

Owner of Universal Cranes, testified his cranes were banned for not paying into scheme.