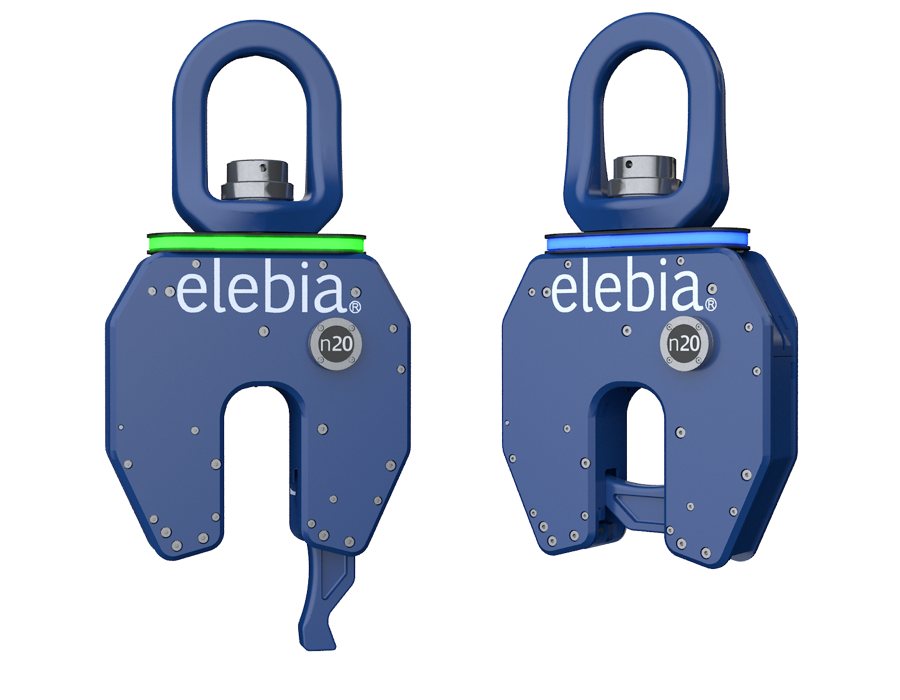 Elebia has unveiled a new 20t capacity automatic hook specifically designed for lifting bell furnaces. Automation and remote operation of the NEO is suited to environments where metals are heated to extreme temperatures in movable dome coils.

The Barcelona, Spain-based manufacturer has introduced the NEO safety hook, which can also be used for lifting and manoeuvring loads that have an oversized lifting point (up to 100mm diameter), to a growing portfolio of products. A standout feature of the latest innovation is a multi-colour-coded light-emitting diode (LED) status indicator that displays green when it’s open and blue when it’s closed, for example.

Oscar Fillol, founder and CEO at Elebia, said: “In regular lifting operations with bell furnaces, the operator has a limited line of sight and poor visibility of the lifting hook’s position and engagement with the lifting point. The status indicator is an additional safety measure. It can be viewed in all operating conditions and displays on the [optional] eMax remote control unit.”

Intrinsically safe, it is not possible to make a lift with NEO while the hook is in an intermediate state (red). The hook will only lift the load once the closure mechanism is locked, indicated by blue coloration of the LED status indicator

The eMax remote control includes a full colour liquid-crystal display (LCD) screen and offers the user a variety of information about the lifting application, including weight, hook status, and alarms that alert the operator to overload or unbalance situations. It is only supplied as an option because there are many instances in bell furnace lifts where an operator will not need to know how much weight is being lifted. However, Fillol said, because of restricted visibility he anticipates that the remote control option will prove popular.

Among other key features are a 4:1 safety factor; one-week autonomy, covering 3,000 cycles or over 250 hours in standby mode; and a customisable top link. A three-hour charge will return the battery to its full capacity and the hook will remain closed even if the battery expires during usage. Further, due to the geometry of NEO’s design, the load will always be positioned in the centre of the hook.

Fillol added: “The hook has a failsafe design that makes it impossible to drop suspended loads. NEO is designed under the same failsafe principles as our automatic lifting hooks and the automatic lifting clamps. It presents a multitude of advantages over standard lifting hooks without a security latch, commonly found in this industry sector, and lifting hooks with a motorised latch. Importantly, hooks without a latch, or when the latch isn’t properly closed, can be tip-loaded, which isn’t possible with NEO.”

Two final details to note are, one, a metal tip that can be inserted to facilitate NEO’s positioning into a narrow space; it is reinforced to protect the hook against impacts. The dedicated space for the placement of the pin has enough of an area to load a lifting points of up to 100mm in diameter; and, two, a pushbutton that can be used instead of automation. However, Fillol does not anticipate its widespread utilisation.

US Crane Prices Set to Rise