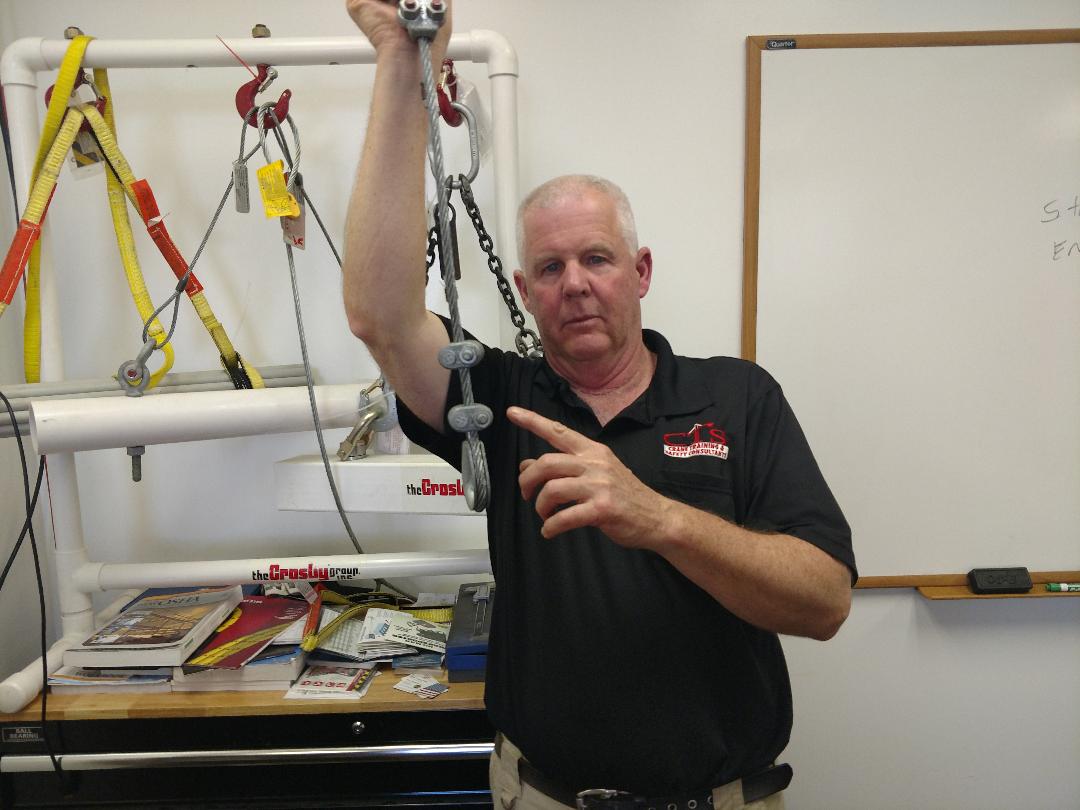 A decorated U.S. Air Force veteran is the latest to throw support behind The Crosby Group’s commitment to raise up to $25,000 for the Children of Fallen Patriots Foundation by donating a portion of every wire rope clip sale from April through June, 2019. The charity provides college scholarships and educational counseling to military children who have lost a parent in the line of duty.

John Glinski, owner of CTS Consultants, a provider of National Commission for the Certification of Crane Operators (NCCCO) training programs, has been using Crosby’s wire rope clips for 35 years. His company is only seven years old, but a rich résumé charts an entire career working with cranes and below-the-hook equipment from the largest lifting, rigging, and material handling hardware company in the world.

Good causes, particularly those with military links, are close to Glinski’s heart, having been medically retired from the U.S. Air Force in April 2006 after 14 years of service. He was injured on active duty in Taji, Iraq a year earlier during Operation Iraqi Freedom, where Glinski was in the 201st Red Horse Squadron, Pennsylvania Air National Guard out of Ft. Indiantown Gap. There, he served as crane operator in a heavy construction unit.

Glinski said: “I recognize that I am uniquely placed to provide testimony for Crosby’s commitment to the Fallen Patriots charity. As a veteran both of the forces and as a purveyor of the company’s world-class rigging gear, I commend the endeavor to align sales of the wire rope clips with a very important cause. I have seen and experienced the impact military service can have on an individual and his or her family, and actively support any charitable or other initiatives that provide for the price that is sometimes paid for serving one’s beloved country.”

Glinski received the Army Achievement Medal for his response to an accident after a soldier overturned a 30-ton capacity crane at a heliport in Taji. In a separate incident, an Iraqi armored personnel carrier fell off a trailer and severely injured a number of soldiers. Glinski devised and implemented a plan to upright the crane and the personnel carrier.

The achievements listed and citation given by superiors stated: “His expertise with crane operations was critical in recovering an Iraqi armored personnel carrier involved in an injury accident… For meritorious service while serving as a construction equipment operator. Technical sergeant Glinski was invaluable for crane operations, as his efforts safely recovered thousands of dollars worth of equipment and expedited crane requirements. [His] outstanding achievements and devotion to duty are in keeping with the highest traditional of military service…”

Glinski recalled: “The operator flipped the crane over while assembling a new hanger on the airfield. The plan involved the use of two HEMTTs [Heavy Expanded Mobility Tactical Trucks], with one winch pulling to upright the crane and another holding the crane back so it didn’t flip over in the opposite direction. I was operating cranes for the operating engineers 20 years prior to this incident so I felt well equipped to respond under pressure.”

Since, as safety manager for cranes and rigging at the Tappan Zee Bridge project, a position he held for nearly five years, Glinski oversaw 100% implementation of Crosby equipment. He is in the process of doing the same on the Purple Line site in Maryland, a 16.2-mile light rail infrastructure project. Glinski estimates that CTS’s training content—courses include NCCCO Rigger I, NCCCO Rigger II, articulating crane operator, and lift director—is “75% Crosby based”.

Crosby’s wire rope clips range in size from 1/8” to 3 ½”. These wire rope end termination fittings are used in a variety of applications to form eyes in the end wire rope, from winch lines to dead ending of blocks to splicing two wire ropes together, plus many other types of field applications.

Remember, to raise the profile of the campaign, Crosby has launched a photo contest whereby end users can submit an image of an application featuring a wire rope clip and potentially be named as one of two weekly winners. For more information visit http://riggingforthetroops.com.

Prototype at the Bauma persuaded Friderici to order the Liebherr LTM 1650-8.1