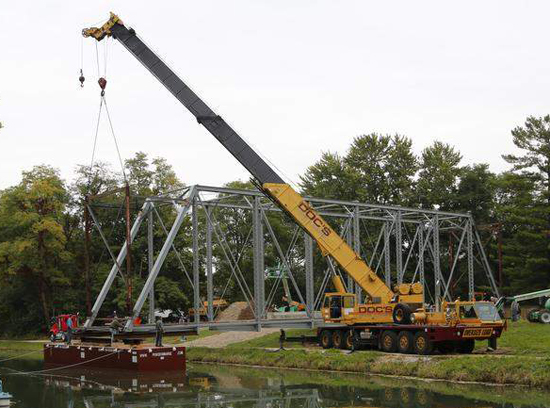 The pace set Tuesday to move a 132-foot, 40-ton iron bridge across the Wabash & Erie Canal onto concrete abutments might have seemed glacial, but in the larger scheme of the 18-month project, the daylong task moved at breakneck speed.

â€œFor a year and a half our volunteers have worked on this. We call it the Monday-Wednesday-Friday crew,â€ said Dan McCain, president of the Wabash & Erie Canal Association as he explained how they cleaned, repaired, reassembled and refurbished the bridge.

Al Auffart is a volunteer on the Monday-Wednesday-Friday crew.

â€œFor a hiking bridge or a bicycle bridge, itâ€™s in pretty good shape, actually,â€ he said. â€œYou wouldnâ€™t want to run any vehicles over it.â€

The bridgeâ€™s glory days of holding cars and trucks aloft over Big Walnut Creek northeast of Greencastle in Putnam County ended about two years ago. Deemed unfit by the Indiana Department of Transportation, it was disassembled and given to the Wabash & Erie Canal Association.

â€œOur crew basically did the minor repairs,â€ said Auffart, one of the dozens of Delphi residents who gathered on the northwest bank of the canal to watch the cranes lift and move the span.

â€œWe had a number of other people involved,â€ he said, describing his groupâ€™s tasks of removing rust, straightening crooked pieces and painting the pieces of the iron bridge gray before it was reassembled and readied for Tuesdayâ€™s debut at its permanent site. 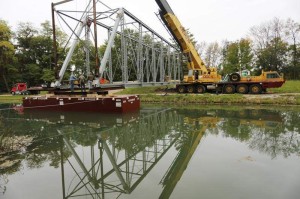 A 100-ton crane lifted the span, which had wheels temporarily attached to the other end. Slowly, a large front-loader pushed the span onto barges floating in the canal. After the barges were tugged to the other side of the canal, a trio of cranes hoisted the bridge up and onto the abutments.

It was all completed before Tuesday evening, but the bridge needs much more work â€” most noticeably, it needs a wooden deck and some railings, and the approaches to the bridge need to be completed. These are all chores for the Monday-Wednesday-Friday crew, McCain said. With a little luck, theyâ€™ll get the bulk of it done before winter sets in, but realistically, McCain expects it to be finished in the spring.

â€œItâ€™s strictly a pedestrian bridge,â€ McCain said, â€œbut it will connect to the gateway trail that goes downtown. … So thereâ€™ll be quite an avenue from beautiful downtown Delphi to the Canal Park.â€

The span connects local trails and the Wabash Heritage route that runs along the river. It also will tie together the Canal Park to a Carroll County Historical Society museum planned for the southeast banks of the canal, McCain said.

Jean Howell, along with her husband, has a business that operates at the park. As the sky started spitting rain, she watched the cranes set up for the final phase of the move.

â€œWeâ€™ve been watching this happen since last fall,â€ she said. â€œThis is the big climax. Couldnâ€™t miss that.â€

Maxim sets up to lift a HVAC unit in Huntington, WV