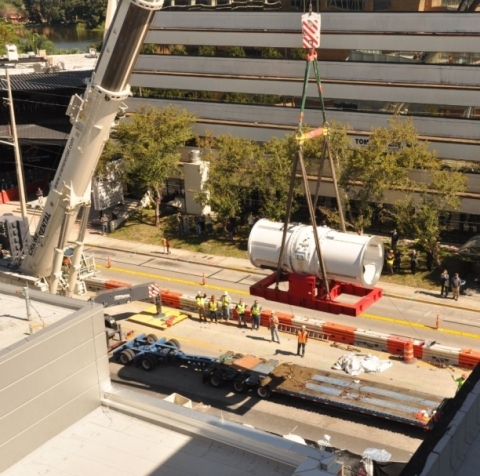 The 58-ton proton accelerator was lifted by crane through a hatch in the hospital’s roof. Traffic was diverted from some lanes of Orange Avenue for the occasion, and even medical helicopters were told to take a different route to the nearby helipad.

The device for delivering radiation to cancerous tumors â€” known as a superconducting synchrocyclotron proton accelerator â€” was lowered into its new home in the UF Health Cancer Center at Orlando Health south of downtown on Sunday by Crane Rental Corporation of Orlando.

The MEVION S250 is a unique proton therapy platform. It requires far less space and has lower capital and operational costs than traditional systems. Also, it is a flexible solution; any health care organization can install one single-room MEVION proton therapy system,Â or as many as they need to treat their patient population.