A giant model dinosaur that faced extinction on the orders of planning officers has been moved during a colossal three-day operation.

Owners of Dinosaur Safari Adventure Golf, in Rowley Lane, undertook the move â€œat considerable costâ€ to save the 100-foot long diplodocus from demolition.

Southern Cranes & Access was brought in to handle the heavy lifting. Looks like they used a Tadano Faun ATF 90G

The huge statue, which was visible from the A1 Barnet Bypass, was due to be torn down last year on the orders of Hertsmere Borough Council planning officers who said it broke green belt building rules.

But managers at the novelty golf range successfully appealed the notice on the promise they would undertake a beastly operation to move the 20-foot tall creature, which weighs several tonnes.

The monumental task of shifting the animal took three days and used a 90-tonne crane across more than 500 yards of temporary road, which was laid especially for the job.

It has now been moved from the golf centreâ€™s entrance to a new location at the side of the 18-hole course.

Scott Sinclair, managing director of Adventure Experience, which owns the attraction, said: â€œWe are pleased that visitors can still marvel at our magnificent Jurassic inhabitant.

â€œOur dinosaurs are a fundamental asset that establishes our site theme, so we are extremely happy that we have found our diplodocus a new home on the course, allowing visitors to continue to enjoy its prehistoric presence.â€ 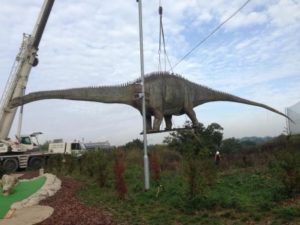 What a complete and utter waste of public money by the council enforcing this.Â The “Beast” brings a bit of interest into the landscape, literally metres away is a huge ugly building thats lit up with green neon lighting, a hotel, an industrial estate a petrol station and a superstore…..So what really was the problem?Â The council would of been better to sort out some sort of crossing for the people who walk to Morrissons, they have to risk their lives crossing the road and as for motorists trying to exit Stirling way its just as bad even though the lights are back working!
SCL Crane needed to move 100 ft dinosaur was last modified: October 23rd, 2013 by Ron Selby

Bam!! OSHA ready to drop $280K in fines on Contractors

Ainscough Cranes rolls out 1000-ton AT for Superyacht