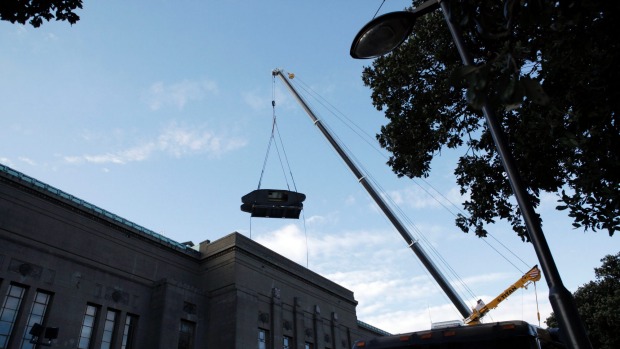 A massive crane was used to lift a tank, a London bus and a large gun into the fomer Dominion Museum building in Wellington where they will form key parts of a World War I exhibition inspired by Sir Peter Jackson.

“This was the part of the project where there was the least margin for error.” 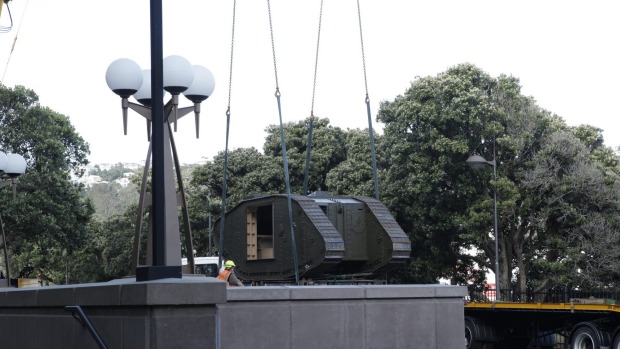 A platform was erected to cut a hole in the wall and the crane used to lift the exhibits up and over the building, which is now part Massey Univeristy, into a central light well and onto the platform positioned one storey above the crane.

“Once they landed on the platform we used a system of winches to bring them inside and into position,” Massey said.

Each piece had to be shifted on to a special weight spreading platform before the next piece could be lifted.

The items were among the first to be placed in the museum for the project and work was continuing to build The Great War Exhibition around them.

The crane lift was originally planned for Saturday but wild weather meant it was postponed until Sunday, when conditions were far more benign.

The exhibition is due to open on April 18.

It will portray the war in chronological order, showing how it changed and affected those who fought it.

The second half of the exhibition focuses on New Zealand’s story, beginning in 1915 with mobilisation and the Gallipoli campaign.

The New Zealand room will be updated throughout the centenary of the war to reflect different theatres of the war and its impact on this country.