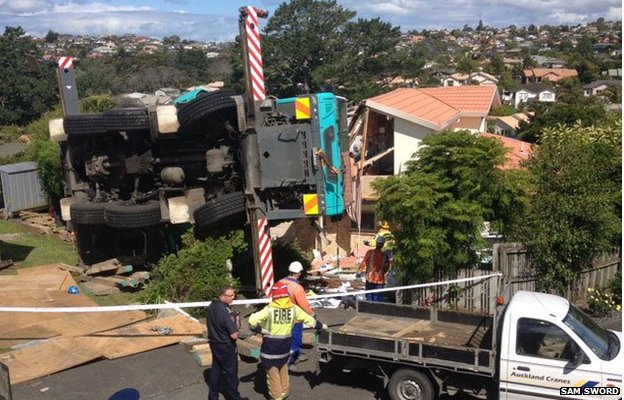 A 55-tonne crane lifting a boat in a suburb of Auckland, New Zealand, has toppled over and crashed into a house.

It reportedly narrowly missed a young man sitting in his bedroom. One person was treated for a minor leg injury,Â the New Zealand Herald reported.

The boat’s owner, Louise Cashmore, toldÂ news portal StuffÂ that the crane was blown over by a gust of wind and crashed into a neighbour’s home.

She said three neighbours had to climb out of the window.

Albany station officer Graeme Butter said the young man who survived the crash “was very lucky, he was in his bedroom and the crane came right through it.”

Another neighbour reportedly pulled a woman out of the house shortly after the crash.

Ms Cashmore said she and her husband had wanted to move the boat to an area behind their house in Unsworth Heights.

She said she “felt awful” about the large hole left in her neighbour’s home.

“It crashed and I don’t know where the boat went flying to but it’s gone, “she said, adding: “Just as well I took the rabbit off the deck.”

Pictures: Cranes to the rescue as crashed crane pulled from house.