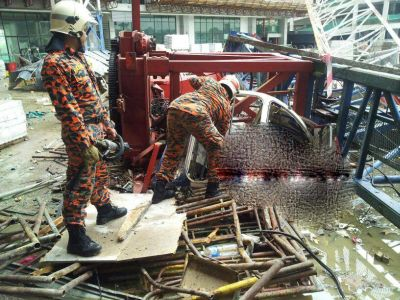 PETALING JAYA: A 26-year-old Johorean native was crushed to death after the crane he was operating fell from 11-storey high at a construction site near Ara Damansara on Tuesday.

It is learnt that the victim, identified as Mohd Hafadz Sanip was operating the machinery near Tower 1 of the building under construction when the crane plunged to the ground.

He was killed on the spot.

Petaling Fire and Rescue Department assistant superintendent Muhammad Zaikunor Afendi Muhd Nordin said that Mohd Hafadz had come in for work at 7.50am after finishing his previous shift at around 4am on the same morning. 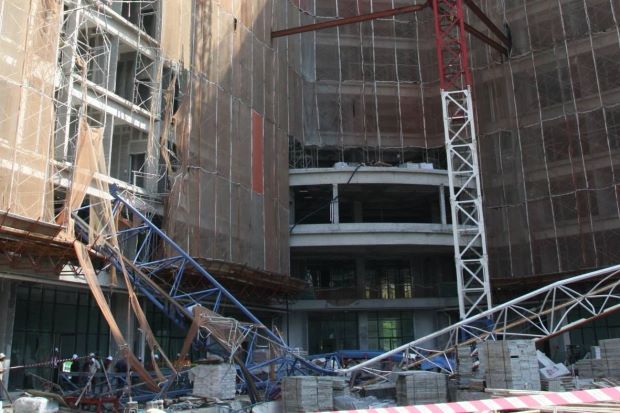 The wreckage of the crane that fell from 11-storey high.

Fire and Rescue at the scene

â€œHis colleague witnessed the crane plunging to the ground at around 8.50am as he was walking to the site office.

â€œHe screamed out loud to alert others who were standing near to the falling machinery,â€ he said.

Another colleague contacted the police and fire and rescue department around 9am.

Police and fire-fighters arrived at the scene around 9.15am to rescue Mohd Hafadz out of the wreckage.

â€œHe was already unconscious by the time we reached the site.

â€œHe was pronounced dead by medical personnel that were despatched to the scene,â€ he added.

Muhammad Zaikunor explained that Mohd Hafadz had already started operating the machine while his other colleagues were still attending the morning briefing.

It is learnt that the crane operator had been working from 7.30am on Monday until 4am Tuesday before coming in for the ill-fated morning shift.

â€œWe believe that he recently moved from Johor in search for additional income.

â€œHe was only on his second week into the job,â€ he said.

Muhammad Zaikunor added that firefighters are working hand-in-hand with the police to identify the cause of the falling crane.

No one else was hurt in the incident.

Mohd Hafadzâ€™s body was sent to the University Malaya Medical Center for an autopsy.