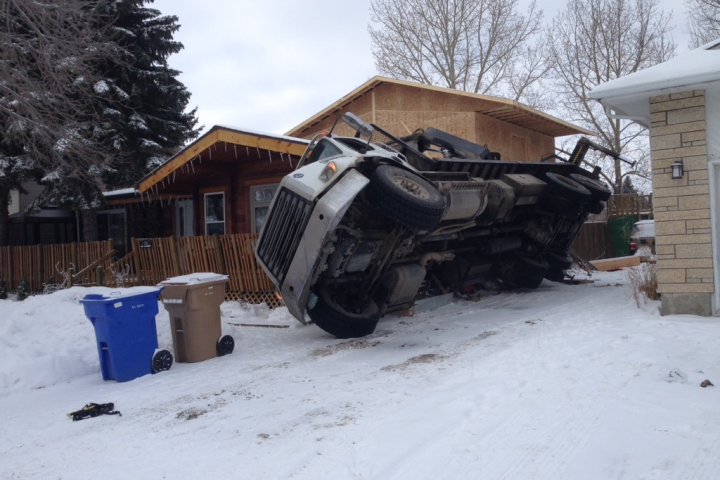 It was a terrifying experience for a toddler and grandma, as both were nearly killed when a crane smashed through the roof of their home.

Wednesday morning, Convoy Supply was lifting a pallet of shingles over the home, when something went wrong and it all toppled into the house on Noonan Road.

18-month old Gabriel Kozak was napping in the master bedroom, just inches from where a pallet of shingles crashed through the roof.

His father, Nathan Kozak, was at work when he got the distressing call. He had only one thing on his mindâ€¦

A crane carrying a load of shingles crashed into this home on Noonan Road.

â€œI heard that the ceiling came down, with a crane through the roof, over my kid in bed, so I came rushing as fast as a concerned father would.â€

The toddler wasnâ€™t alone in the room, his grandmother was nearly killed by a massive support beam from the log home.

â€œIf that beam came down on her head, or that pallet was lying on an infant, I donâ€™t know what I would do.â€

Young Gabriel escaped without any injuries, but has been crying consistently since the incident, according to his father. His grandmother is nursing a sore leg.

â€œThey didnâ€™t have enough room to put their outriggers out properly, they only had them out 8 inches, and I donâ€™t know if its inexperience or heâ€™s just brave, but he decided to give it a shot anyway.â€

He also questions why the company didnâ€™t knock on the door to see if anyone was inside before lifting such a heavy load.

â€œI donâ€™t believe we have a protocol, but we are going to put one in now.â€

Freshwood said the companyâ€™s insurance will cover the cost of repairs, and adds theyâ€™re worried about three thingsâ€¦

Because nobody was killed or seriously injured, Occupational Health and Safety is allowing Convoy Supply to conduct its own review of the incident. When complete, OH&S will look over it for deficiencies.