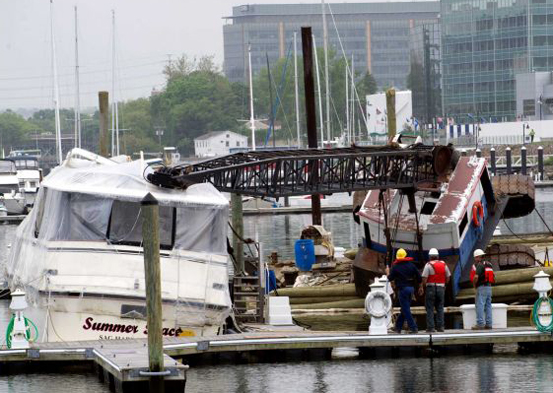 Crane operatorÂ Richard Dufresne, 45, of 109 Mennella Road, Poughquag, N.Y., was charged with a single count of reckless endangerment and operating a crane without aÂ license. 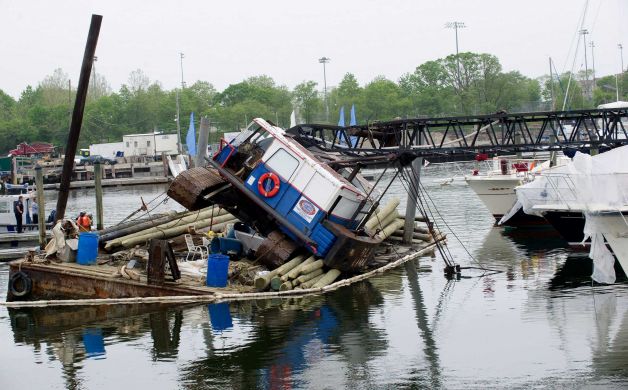 A crane lays collapsed on top of a yacht at Avalon on Stamford Harbor on Wednesday, May 22, 2013. Photo: Lindsay Perry

The two were released after signing written promises to appear in court inÂ January.

A message left with Concavage seeking comment was not immediatelyÂ returned.

According to the arrest affidavits, Dufresne was operating a crane for Concavage at Southfield Avenue’s Avalon Bay Marina on May 22, 2013 pulling out storm damaged pilings when the crane flipped over. After glancing off a sail boat, the 80-foot crane boom landed on a 47-foot power boat, which barely kept the crane itself from toppling into the water at the marina. No one was hurt in theÂ accident.

After the crane was righted later that day, a state crane inspector had a look at the crane and determined that it lacked a number of safetyÂ devices.

According to the affidavit, the crane had no boom hoist limiting device, no boom stops that could keep the crane from flipping over backwards, no flotation list and trim device, no load chart, no clearly marked boom hoist cable, no inspection documentation and no four year flotation deviceÂ inspection.

State crane inspectorÂ Elliot HenowitzÂ reported to the state police officer investigating the incident that if any of the required devices were not in proper working order operation of the crane should have been taken out of service immediately, the affidavit said. The investigators also discovered that the crane was not registered to be operated inÂ Connecticut.

WhenÂ Trooper Michael Marino, who investigated the collapse, met with Concavage a day after the incident, Concavage admitted that he removed the crane’s boom stops four months earlier because they wereÂ bent.

Concavage said he was trying to repair the stops and knew it was a serious issue. After reflecting on the problem, Concavage said he should have left the boom stops in place, the affidavitÂ said.

When the trooper checked into Dufresne’s background, he could not obtain a crane license in the 20-year employee’s name either in Connecticut or New YorkÂ state.

Dufresne said to Marino that he knew the boom stops had been removed and were in need of repair, the affidavit said. He said he was aware Concavage was trying to get them fixed and that operating without boom stops was a seriousÂ issue.

Dufresne told Marino he thought the collapse occurred because the barge the crane was sitting on was overloaded with woodenÂ pilings.

About three weeks later on June 12, state police got a tip that Concavage was working in the marina again pullingÂ pilings.

When Marino went over he saw Dufresne operating a different crane that turned out not to be registered in the stateÂ either.

When that crane was checked out, it was determined it too did not have a readable load chart, no clearly marked boom hoist cable and no inspection documentation. Henowitz told Marino that operating the cranes without a load chart “would be like driving a car blindfolded,” the affidavitÂ said.

When Marino called to find out what was going on, Concavage told him, “you gotÂ me.”

Dufresne told Marino that he was told by Concavage to pull the pilings and finish the job at Avalon Bay. He said that they had been working in the marina sinceÂ Monday.

Last week, the U.S. Department of Labor’sÂ Occupational Safety and Health Administrationfined Concavage $165,200 for “willful and serious workplace safety violations,” related to the missing safety devices on the toppledÂ crane.