Center section of Hinsdale’s Oak Street bridge up and out – Chicago, IL 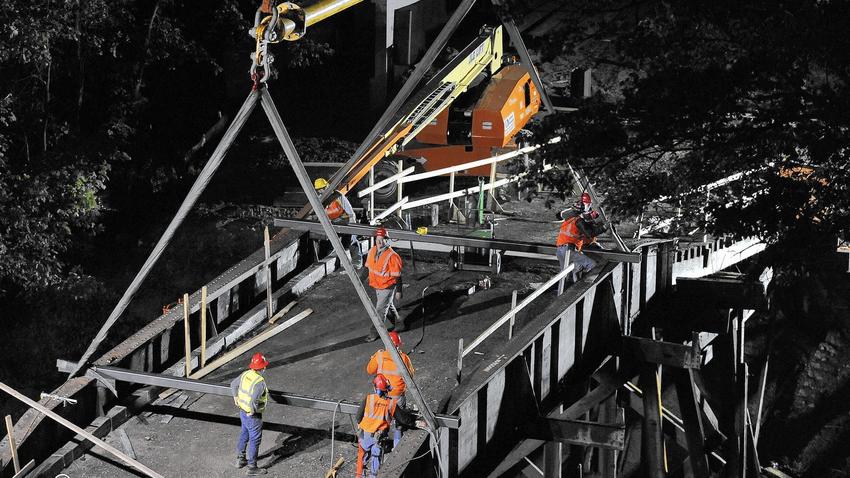 The sign on Oak Street at Chicago Avenue reading “Bridge Out” finally is true.

With only minutes to spare in the original time frame the Burlington Northern Santa Fe Railway allotted, the center portion of the Oak Street bridge in Hinsdale was detached and lifted out between 3:20 a.m. and 3:30 a.m. Tuesday.

A crane lifted the old bridge deck out in one piece and set it down on Hillgrove Avenue at Oak to be taken apart later in the week.

The project went smoothly, said Samantha Fountain, project engineer for BNSF, after the crane set down the bridge and disconnected from it.

The crane, rented from Stevenson Crane Service, is capable of lifting 600 tons, although the old Oak Street bridge was only a fraction of that. A worker from Kenny Construction, the contractor for the project, said the bridge deck, which consisted of the wood base and steel plate girders on the sides, weighed about 52 tons.

Numerous flatbed trucks carrying the crane and tons of counterweights arrived Sunday afternoon. The crane was assembled and the counterweights loaded onto it the day before.

Two metal beams were attached across the bridge to secure it and prevent it from folding in on itself when it was lifted, said Todd Destree, senior construction project manager with H.R. Green, the engineering firm the village hired to oversee the job.

BNSF had agreed to stop all trains on the three tracks that run below the bridge between 1:30 a.m. and 3:30 a.m. Tuesday . Apparently, a late train delayed the start of the removal process, which included using acetylene torches to free the bridge from its supports.

Large straps were wrapped around the bridge and the crane carried the bridge by the straps.

About 20 spectators, not including workers from BNSF and Kenny Construction, village staff and employees of Adventist Hinsdale Hospital immediately north of the bridge, gathered to watch the engineering feat.

Joe LeMay of Downers Grove was the first person to set up a video camera and wait at the Highlands train station, where the village recommended people position themselves.

LeMay works as a train engineer for BNSF, primarily on freight trains, he said.

“I ride trains under that bridge almost everyday,” LeMay said, and he appreciates the bridge’s long life.

The bridge has been part of Hinsdale and the railroad for more than 100 years, said LeMay, who belongs to a train club.

According to a draft of a chapter on the history of Hinsdale, written by a longtime Hinsdale resident in 1985 for a book called “DuPage Roots,” the bridge was built in 1875 as a footbridge and was made large enough for cars in 1910.

The original bridge was replaced with another bridge, with steel girders and a wood base in 1947. The replacement bridge was a train engine turntable, that had been in use elsewhere. Although it’s not known where the turntable came from, Kenny Construction has drawings of the turntable bridge that show it was built in 1899.

“It’s the end of an era,” LeMay said. “They are replacing it with another bridge, but it’s the last of its kind, an old wooden bridge, especially in the metropolitan Chicago area.”

Betsy and Bill Leong of Hinsdale arrived at the Highlands station later in the morning.

Both said they have a lot of memories of crossing the bridge, such as when they used to drive over it to take their children to school.

“We are missing it already,” Bill Leong said, noting the bridge has been closed since May. “That’s when you realize how convenient it has been.”

The Leongs expect the new two-lane bridge will be much better than the old one-way bridge. A traffic signal at either end of the bridge alternated which direction had the right of way to cross.

The Leongs said multiple times they saw drivers ignore the red light on their side of the bridge and try to cross.

“I have encountered that myself,” Bill Leong said.

He was proceeding over the bridge when he met another car, which had ignored the red light, coming toward him. They were able to maneuver past each other, Leong said, but the steepness of the bridge prevented drivers from seeing oncoming vehicles.

The new bridge will be twice as wide as the old with two lanes. The approach to the bridge will be longer and less steep. At an elevation of 23 feet, the new bridge also will be 3 feet higher than the old to provide more clearance for train cars passing underneath.

Removing the bridge has been anticipated since May and postponed several times while Kenny waited approval of its plan from BNSF.

“We have pushed it as much as we can,” Hinsdale Village Engineer Dan Deeter said. But the project still is on schedule to have the new bridge substantially completed and open to traffic in December.

“We live pretty close,” Bill Leong said. “I want to see how they take the bridge apart.”

Center section of Hinsdale’s Oak Street bridge up and out – Chicago, IL was last modified: August 26th, 2015 by Ron Selby

Bertha’s 120-foot drop completed, but it’s not off the hook just yet