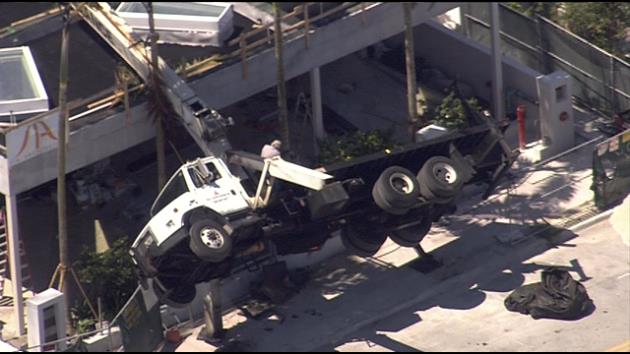 MIAMI BEACH, Fla. (WSVN) — Construction at a Miami beach building has been put on hold after a crane toppled over on top of a building, trapping the crane operator inside.

Miami Beach Fire Rescue responded to the scene after the crane, which was on top of a truck, fell over on its side, sometime before noon Monday. Miami Beach Fire Capt. James Casteel said, “The crane operator was on the outside of the crane, working the crane, too heavy of load. The crane went up, and he was trapped on it. We set our ladder truck right here. We used our ladder to swing him over and pick him off the crane.”

The truck and crane tilted to one side, lifting the truck from the road. Landlord Nelson Fox said, “They were putting gravel on the green roof and the boom overextended itself and cantilevered the truck up into the air.”

Video from the scene showed the crane leaning into a building at 868 Commerce St. After the crane operator was rescued, Casteel said, “He wasn’t injured. He was fine just a little shook up.”

Although the crane operator did not want to talk about the accident, workers at the scene said the accident has put the brakes on the construction of a new restaurant within the building. “It’s going to hold us up,” said construction worker Robert Gonzales. “We have to make sure the structure is safe before we go back in there.”

Two other cranes had to be brought in to right both the truck and the damaged piece of equipment.

Agents from the Occupational Safety and Health Administration were on the scene investigating what went wrong.

It remains unknown if any citations will be issued in this mishap. However, the construction company working on the restaurant had all of the proper permits.