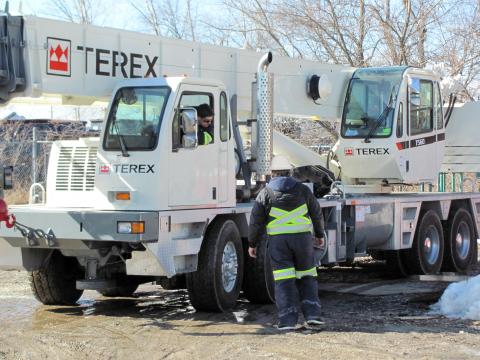 Habitat for Humanity Brant, Ontario, Canada, has built 19 new homes in the area since 1999 by relying on the generosity of volunteers to perform the majority of the construction work.

When the local organizationâ€™s current construction project called for the use of a crane to lift a roof into place on a two-story house, BNC Crane Services, headquartered in Brantford, was more than happy to lend a hand. Using a Terex T 560-1 telescopic truck crane, BNC Crane donated its talent to make the dream of home ownership possible for a family of five.

The new home was built in an existing neighborhood, and the jobsite was small. Also, the crew had to account for several electrical wires and other houses next to the site. To make sure the lift was successful, Habitat for Humanity involved BNC Crane’s team in the planning stages of the construction process.

The job required BNC Crane to lift an 8,000-lb. roof, at a radius of 55 ft., two stories high for workers to secure it to the home. To perform the lift, BNC Crane chose the Terex T 560-1 crane because of its precision handling and ability to be positioned and rigged quickly on the job site.

â€œThe Terex T 560-1 craneâ€™s compact chassis configuration was beneficial for achieving the proper positioning in the tight working quarters,â€ said Brad Moore, owner of BNC Crane. â€œIt only took us 15 minutes to get set up. My apprentice and son, Nathan, worked with Habitat for Humanityâ€™s volunteers to strap the roof, which was pre-built on the ground, including sheeting and shingles, and from there, I had to perfectly lift the roof without adding stress to the structure. The whole process went smoothly, and two hours later the roof was in place and secure.â€ 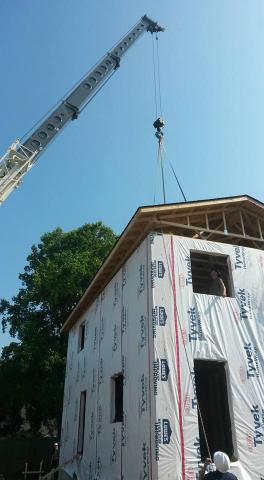 BNC Cranes purchased the T 560-1 truck crane in March, 2015, from Cropac Equipment, a Terex Cranes distributor with locations in Oakville, Ontario; Laval, QuÃ©bec; and Nisku, Alberta. â€œWeâ€™ve worked with BNC Crane for a long time,â€ says Dan Sweeney, sales representative at Cropac Equipment. â€œThey work hard and are well-respected in the area. When they were in the market to upgrade their equipment fleet, they did their homework. Brad (Moore) knew exactly what he wanted in a crane. And, the T 560-1 was the perfect unit for their needs.â€

Since BNC Crane operates in a rural area, travel speeds are important to them. With travel speeds of up to 65 mph, the T 560-1 crane met those requirements and comes equipped with an air-ride suspension for smooth travel even on rough terrain.

â€œWe do a wide range of jobs around the area,â€ explains Moore. â€œOur work varies from performing large jobs, like steel erecting, mounting air units, installing concrete and roof trusses, to smaller residential jobs, like installing hot tubs, swimming pools and moving decorative rocks. We needed a machine that could lift up to 60 US t, while having the versatility to perform smaller jobs fast and efficiently. And, thatâ€™s exactly what we get from our Terex T 560-1 truck crane.â€

BNC Crane also selected the T 560-1 truck crane because of the unitâ€™s 110 ft boom height and 33-57 ft telescoping jib range. â€œPrior to purchasing this unit, weâ€™ve been primarily using boom trucks, which limited us a bit,â€ adds Moore. â€œPurchasing a telescopic truck crane is a good investment, and we expect it to help us get additional work.â€ 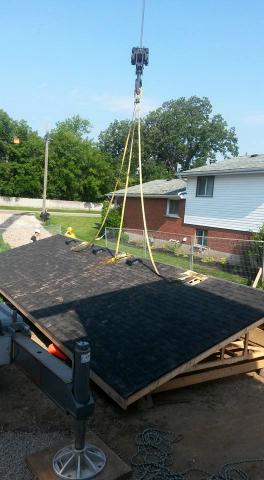 Moore is impressed with how smoothly the T 560-1 crane performed the Habitat for Humanity lift. The crane features electro-proportional joysticks which require less effort to operate, regardless of the load weight, while the unitâ€™s two-speed winches shift on the fly, allowing the operator to match hook speed to the needs of the job. â€œIâ€™ve been impressed with how precise the controls handle and the power of the hydraulics,â€ says Moore. â€œWe may not have needed all that power on
the Habitat for Humanity lift, but itâ€™s sure nice to have.â€

Everyone at BNC Crane is proud to be a part of the Habitat for Humanity build, and the charitable organization is certainly thankful their help. â€œWe are always happy to lend our expertise to a great cause,â€ Moore concludes.

Through volunteer labor and donations of money and material, Habitat for Humanity builds and rehabilitates affordable houses with the help of the homeowner family. Homes are sold to the families at no profit and are financed with geared-to-income, no-interest mortgages.