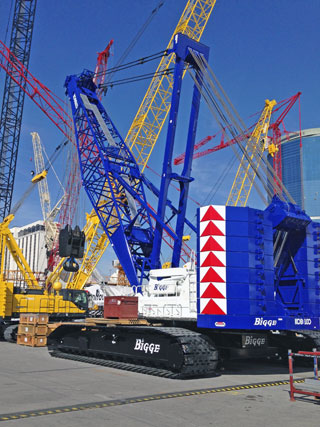 Bigge had an expanded presence at this year’s CONEXPO. As the world’s largest Terex crane dealer,they had representatives at the Terex crane booth, they also had representatives at Kobelco and Xtreme Manufacturing booths as well. Truthfully the presence for Bigge Machinery was felt at Kobelco, Grove, Manitowoc, Tadano, Broderson and the Xtreme Manufacturing locations.

Bigge had the largest inventory of new 2013 and 2014 Terex cranes and provided exclusive show pricing on Terex’s entire line of cranes. Reps were also on hand to offer CONEXPO-only deals on all Kobelco North America crawlers. Bigge has years of experience with both domestic and international shipping as well as some of the most innovative financing arrangements in the industry.

Clint Wood with Crane Network got the chance to meet up with the Bigge gang and see their impressive offerings. Great people to spend some time with and Crane Network certainly appreciates your business.Â 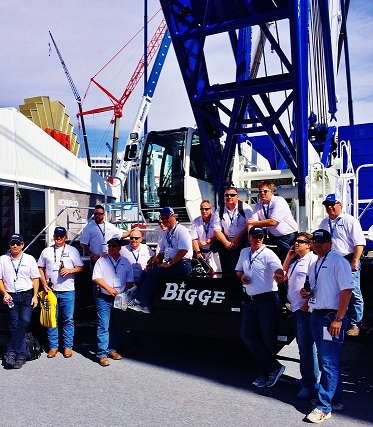 CONEXPO is one the world’s largest crane and heavy machinery expositions. Held once every three years in Las Vegas, it encompasses over 2000 exhibitors showcasing new products and technologies from every major construction industry manufacturer including lifting, asphalt, aggregates, concrete, earthmoving, mining, utilities and more. Taking over the entire Las Vegas Convention Center, and spreading way beyond it into the streets of Las Vegas. See you in three years Las Vegas.