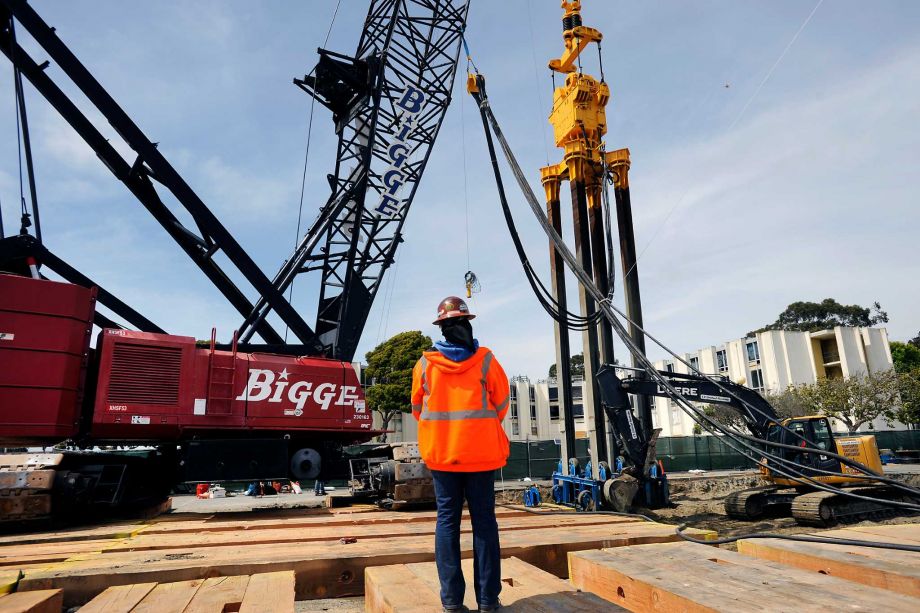 As the head of an international engineering firm, Uri Eliahu is not easily impressed by earth-moving machinery.

But Eliahu looked like a delighted kid in a sandbox as he stood out on Treasure Island recently with a dozen other yellow-vested engineers, watching a steel apparatus that resembled a pair of monumental tuning forks dangling from a 280-ton crane.
â€œFor us geotech guys, this is about as good as it gets,â€ said Eliahu, president and CEO of Engeo, which is overseeing the geotechnical work on Treasure Island.

The piece of steel machinery Eliahu and his colleagues were staring at was the 53-ton, 75-foot-long Jafec 40,000 Direct Power Compactor. It features a quartet of vibrating prongs that can probe deep into small patches of Treasure Island earth, mixing up its sandy soil like pancake batter in a bowl. Never before seen in the United States, the compactor was shipped from Japan, complete with a 10-man Japanese crew to run it. If you want to rent one for your backyard, it would cost about $500,000 for a couple of days.

â€œI would love to (play around with it), but I donâ€™t think they will let me,â€ said Eliahu.

While the compactorâ€™s recent residence on Treasure Island was just a test run, over the next decade it will play a key supporting role in preparing the 425-acre artificial oasis in the bay for the 8,000 housing units that will sprout up alongside a new hotel, retail village and 300 acres of parkland.

On May 29, the $1.5 billion plan to redevelop Treasure Island, 15 years in the making, hit a milestone when the Navy transferred 290 acres of the site to the city. The transfer allows developers Lennar Urban and Wilson Meany to start work on building the infrastructure â€” first the soil work and then the roadways, streetlights, sidewalks, parks, and water and sewer pipes â€” that all new communities require. Plans now are to break ground on the first batch of housing, about 500 to 800 units, by 2017.

Built on top of a shoal protruding from Yerba Buena Island, Treasure Island was created for the 1939 Golden Gate International Exposition. The 450-acre island was formed out of sand dredged from the bay, with a retaining wall built around it. It later became a Navy base and was home to blimps, dirigibles and seaplanes. During World War II, 12,000 military personnel passed through every day for processing and assignment. 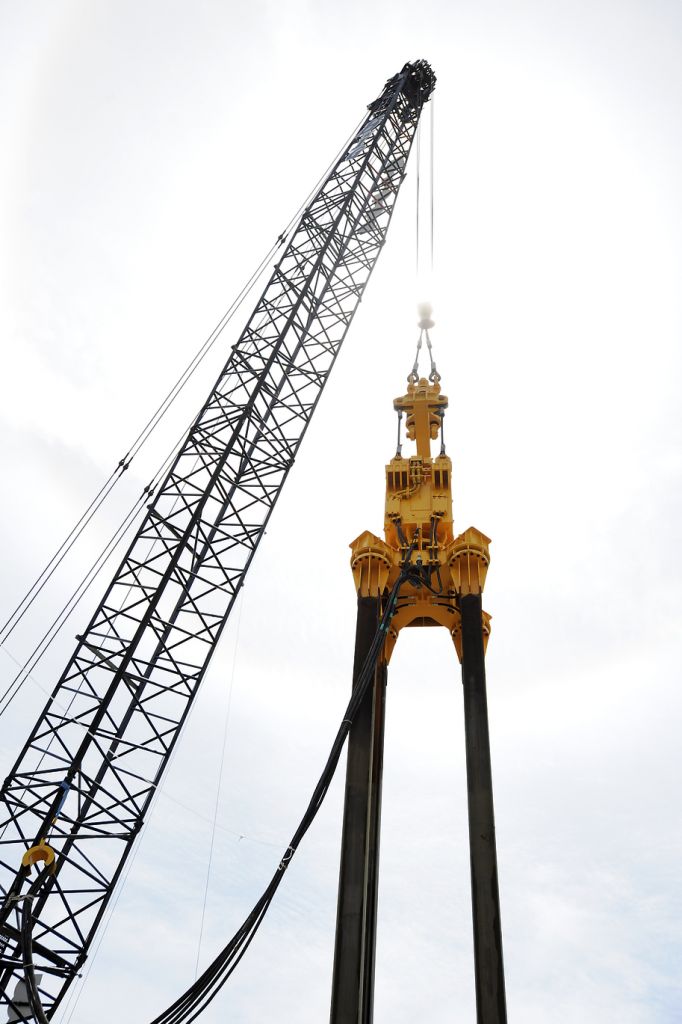 The earth compactor has four vibrating prongs that can probe deep into small patches of soil, mixing it like pancake batter.

The Navy base closed in 1997. Since then, a redevelopment plan has slowly wended its way through a complex development agreement, three years of environmental lawsuits and highly publicized concerns about radiation contamination. Meanwhile, the city has put the island to use. Many of the old Navy barracks and hangars have been repurposed as housing and commercial space â€” the island currently has about 2,000 residents and 160 businesses. The island today is a hodgepodge of uses â€” there are wineries in old airplane hangars, a Gaelic Athletic Association clubhouse, Little League baseball fields and training programs, and housing for formerly homeless veterans.

The sand that makes up Treasure Island is 45 feet deep in most of the areas where housing will be developed. Because loose sand tends to â€œliquefyâ€ during earthquakes, the point of the compactor â€” which the manufacturer helpfully describes as a â€œquadruple axial rig with a vibro-hammer at the top of each pileâ€ â€” is to shake up the particles so they settle in a denser form. A backhoe buzzes around the compactorâ€™s piles, back-filling the spaces created by the densification. The compacted area is then pressed down with a 36-ton tamper.

â€œVibro-compaction is by far the best means of densifying the island,â€ Eliahu said. Other options include â€œbeating the hell out of itâ€ with a tremendous weight, but that would be effective only in compacting the top 25 feet of island sand, not the bottom 20 feet. Another option, he said, would be to dig all the dirt out and then put it back.

Tons of dirt to be added

â€œYou would have a big hole in the middle of the bay, and you would have to figure out what to do with all the water pouring in,â€ he added.

About $140 million will be spent on preparing Treasure Island for development. An estimated 1.25 million cubic yards of dirt will be added to the island, making it high enough to withstand 36 inches of sea level rise. In addition, engineers will use concrete to strengthen the new abutment around the islandâ€™s perimeter. A 300-yard-wide shoreline park will buffer the residential neighborhood from the water. 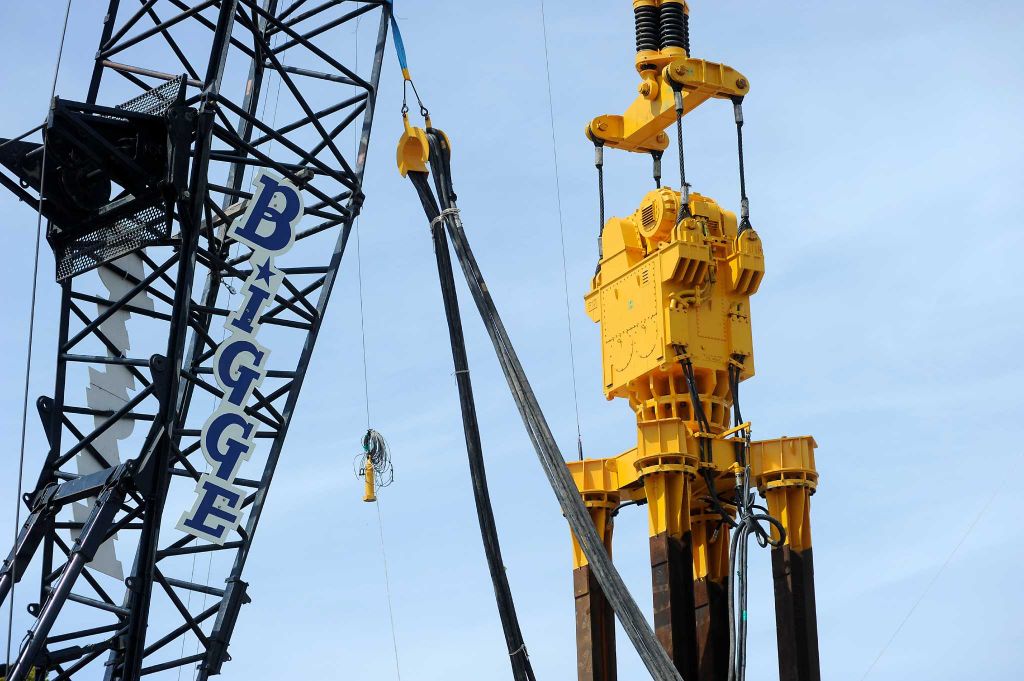 The Japanese made DPC Earth Compactor hangs from a crane during a test run of the machinery by the Lennar Corporation on Treasure Island in San Francisco, CA Friday, May 29, 2015.

â€œBy 2018, this projectâ€™s going to feel very real â€” there will be an eight-story building right on this site,â€ he said. â€œYou are going to see buildings sprouting up all over the place.â€ 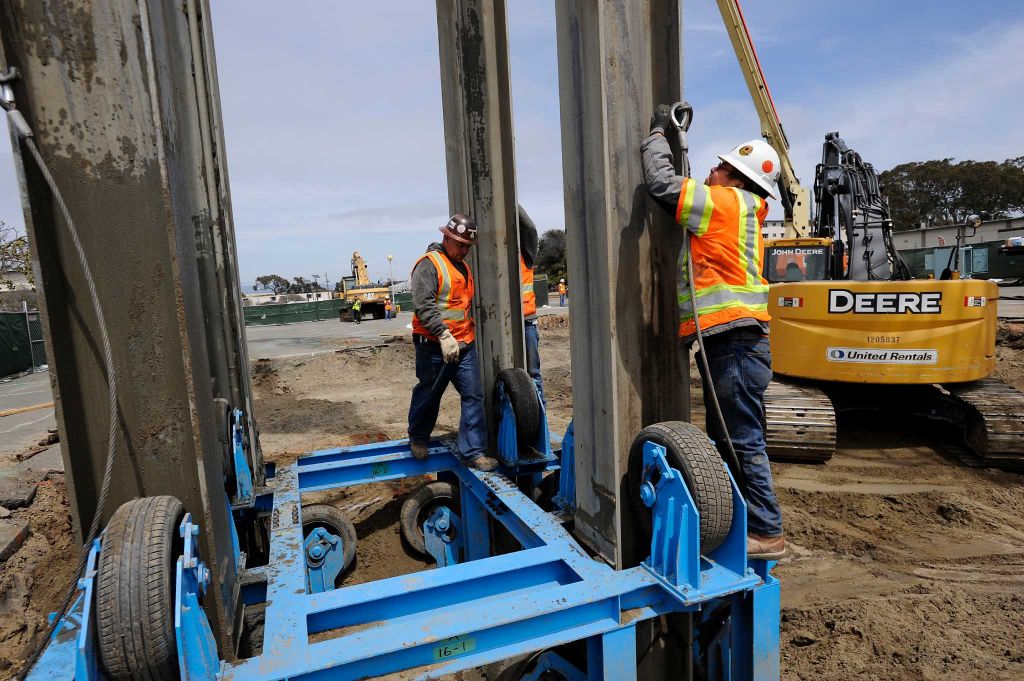 Workers with Jafec USA Inc. and NGO attach cables to the base of the DPC earth compactor prior to moving it to a new section of ground during a test run of the machinery by the Lennar Corp. on Treasure Island in San Francisco.

The 53-ton, 75-foot-long Jafec 40,000 Direct Power Compactor hangs from a crane during a test run of the machinery to compact soil on Treasure Island.