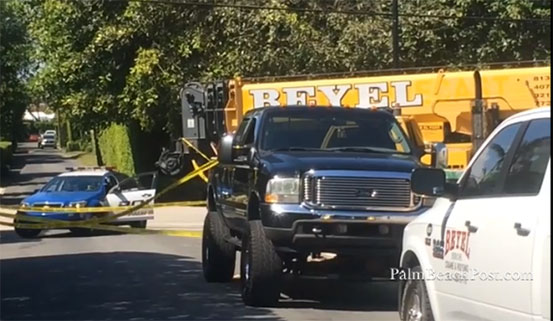 UPDATE:Â The driver of the crane that hit and killed a pedestrian this morning didnâ€™t know he hit someone, Palm Beach Police said.

The pedestrian was hit near the crosswalk and was dragged under the craneâ€™s wheels for about a half a block. The crane driver had been eastbound on Royal Palm Way and then turned south on S. County Road when he struck the pedestrian. The craneâ€™s driver was en route to a residential job at the corner of S. County and Jungle roads, Capt. Jeff Trylch said.

South County Road is expected to be closed from Royal Palm Way to Brazilian Avenue for about three or four hours.

ORIGINAL STORY:Â A pedestrian has been killed at the intersection of South County Road and Royal Palm Way.

An investigation is underway and traffic in the area is stopped. The crash happened about 9:30 a.m.

The pedestrian was struck by a â€œvery largeâ€ crane that was driving on the road, according to authorities.

â€œWe have the driver speaking with us right now,â€ said Capt. Jeff Trylch.