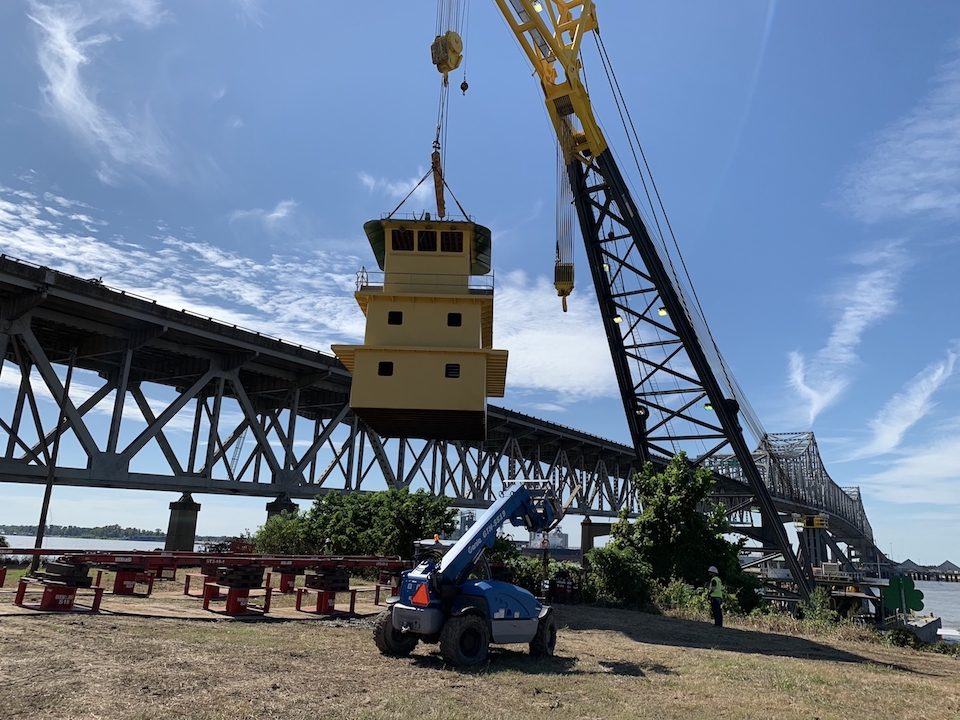 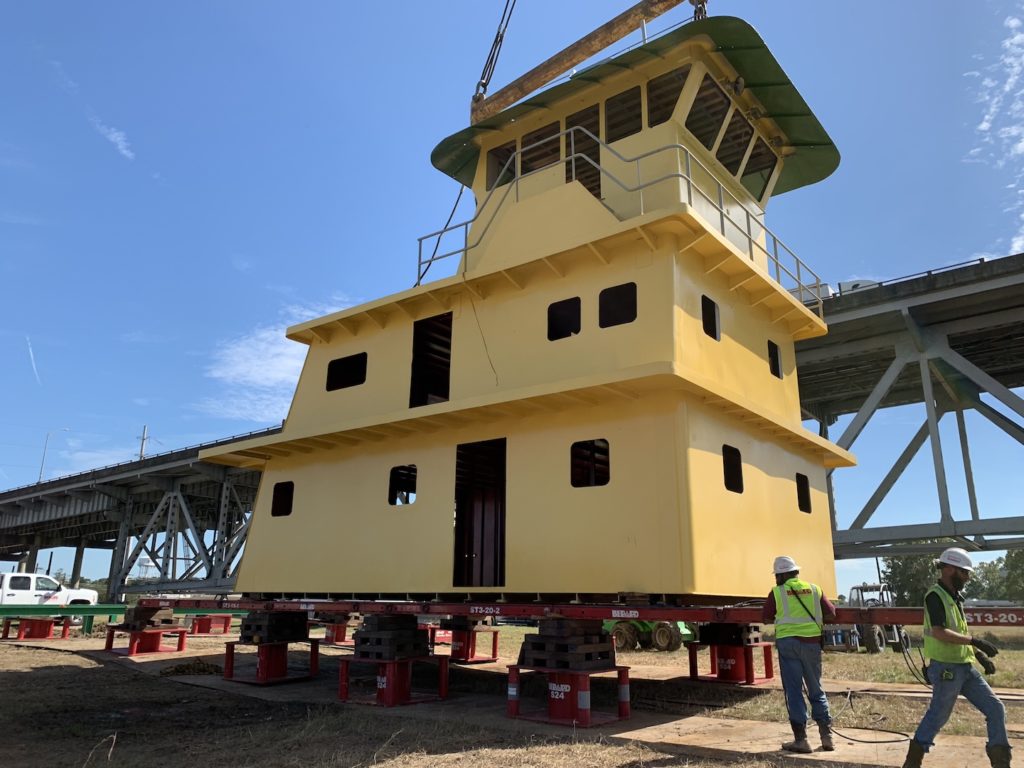 The cabin had to be moved a further 80 ft. from beneath the hook of the crane to its final position

Berard’s client wanted to convert an old tugboat cabin into an office and interactive learning center for students. The wheelhouse will eventually be outfitted with controls and screens so participants can visualize working as a captain on the vessel. The lower levels of the cabin will serve as an office and operational space for the customer.

The 30 ft.-long, 18 ft.-wide structure was lifted by a 600-ton capacity floating crane but had to be moved a further 80 ft. from beneath the hook to its final position. The client had originally planned to use the crane to set the cabin onto a base frame, but Brett Berard, vice president of operations at Berard, explained that falling river levels at the time of the project rendered the reach out of the lifting machine’s capacity. 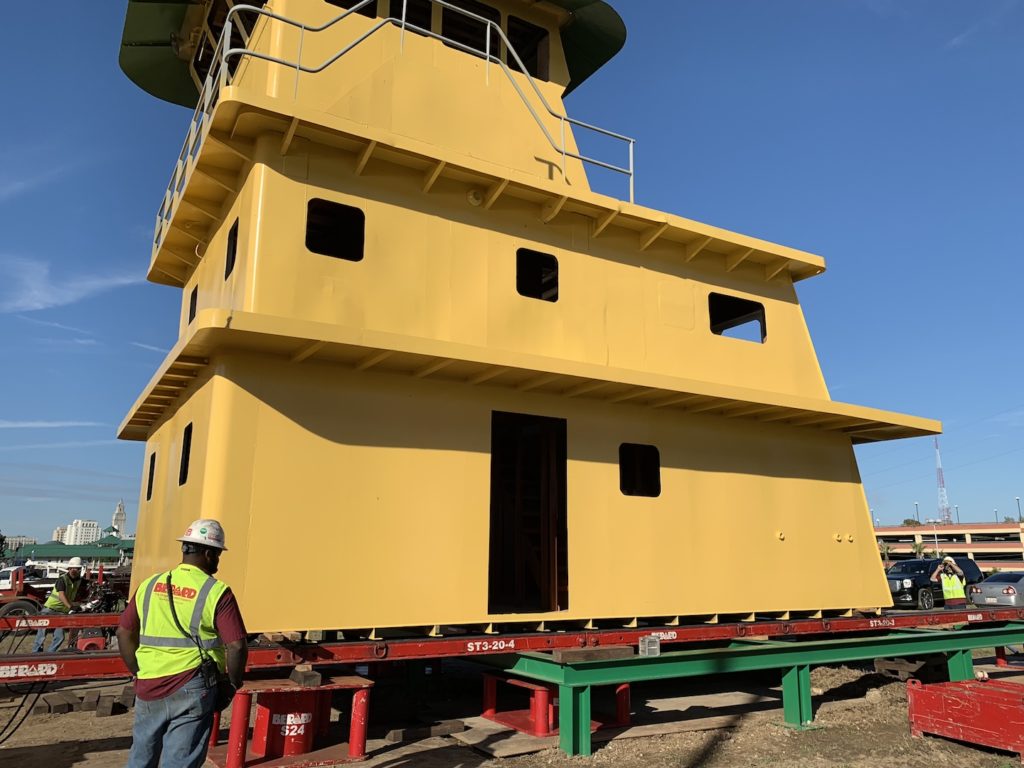 The 30 ft.-long, 18 ft.-wide structure was moved with ease by the HT300 heavy track hydraulic skidding system

He added: “A larger crane could have completed the task, but it would have been far more expensive and time consuming than using the Hydra-Slide HT300. Further, a quick turnaround was required as the client was unaware of a solution to move the cabin from the crane radius to the foundations. Upon discovery of the Berard / Hydra-Slide solution, we mobilized in only three days to avoid additional reduction in river levels; we were onsite for one day.”

Hydra-Slide’s heavy track skidding systems are one of the most cost-effective, accurate, and safe methods for moving, loading, or unloading all types of heavy loads where a rigid, load carrying track is required. In this case, the HT300 combined with a hydraulic jacking system, jacks, and cribbing to complete the slide. 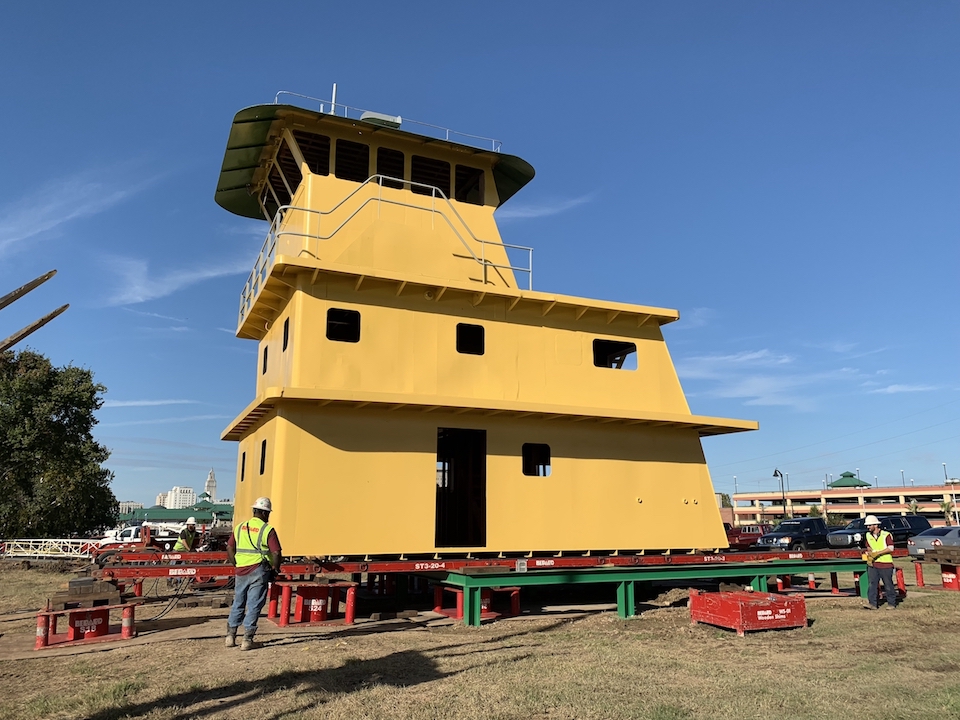 The unit was the first of three systems from the Canadian manufacturer Berard has acquired—and it remains the flagship product. A 500-ton capacity HT500, also from the heavy track range, and a 400-ton capacity LP400 low profile skidding system make up the fleet. It also owns self-propelled modular transporters, highway transporters, and other heavy rigging equipment.

Brett Berard said: “We first purchased the HT300 system due to the simple design and likely frequency of use; most cargo utilizing skid systems is less than 600,000 lbs. However, the whole fleet has helped us to win contracts where we wouldn’t have been successful if presenting alternative technologies and methods as solutions. The myriad of benefits we were able to offer the client in the old tugboat cabin move are testament to that.”

The floating crane could only lift the 60,000-lb. cabin so far

He concluded: “Most clients are overthinking a solution—large cranes, the infamous ‘mega heavy lift helicopter’—when in reality the simplistic skid solution is not only the safest but the most cost effective method of moving heavy cargo in confined spaces.”

Berard is headquartered in New Iberia with a second Louisiana site in Morgan City and additional facilities in Houston, Texas and Theodore, Alabama.