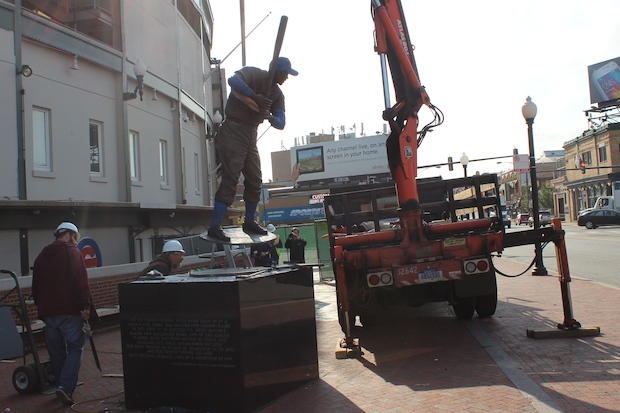 CHICAGO â€” As theÂ reconstruction of Wrigley Field takes place this offseason, statues honoring two of the Chicago Cubs’ greatest icons, Ernie Banks and Harry Caray, will be taking a vacation in Michigan.

Both statues are headed to Patten Monument Co. in Grand Rapids for restoration work as part of the Cubs’ effort to preserve historic features at Wrigley Field during the ballpark overhaul. 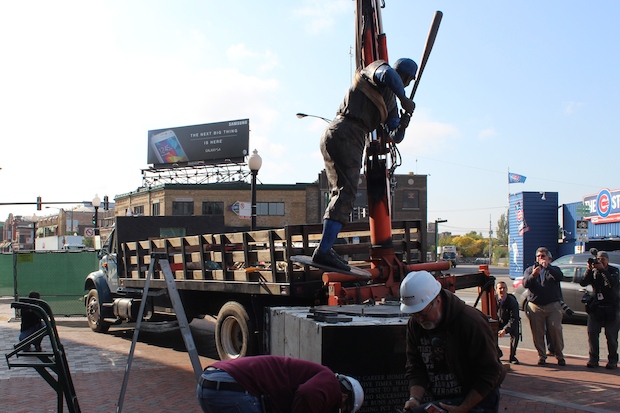 While in Michigan, the Ernie Banks statue will be refurbished. Both statues will receive new bases, officials said.

When it was time to leave The Friendly Confines Wednesday morning, it seemed Mr. Cub wasn’t ready to leave his home without a fight. It took the crew a little more than an hour to saw through the four bolts that secured the statue of the legendary infielder to its large black granite base.

Eventually, parts of the base fell to the ground as the crew sawed through the bolts.

“Salvaging the granite was a hope,” said Lou Cella, the sculptor responsible for the Banks tribute. “They’re put in with the idea that they’re not going to move again, that they stay secure and they’re relatively safe from theft.

“You’re not putting them in with the thought that they’re going to come out again, although we have been modifying our process since this one was done, so if something needs to be moved later, it’ll be easier to do,” Cella said, facetiously adding that the pieces of the base might be auctioned off to someone inclined “to own a piece of Wrigley Field.”

Newer statues have a steel infrastructure similar to a skyscraper, while the Banks statue was secured in concrete, he said.

The tribute, which was fastened to a crane as workers sawed through the last bolt, jolted into the air, suspending it about a foot above the base and giving Cella quite the scare.

“It scared the crap out of me is what it did. I didn’t realize it was under that much tension. I was just expecting it to slowly go up. I wasn’t expecting it to pop like that.Â Sammy SosaÂ never jumped like that,” Cella joked.

“You didn’t see them putting the paddles on me getting my heart started again,” Cella said.

The Banks tribute will return to the foundry where it was originally cast. There, all the coloring will be sandblasted off the statue to remove any dirt or salt that has worn into it over the years. Then workers will reapply the patina and add a new sealer that protects it from bad weather.

The Banks statue retained more of the dirt because of its vicinity to Clark Street, which makes it more susceptible to the snow and salt of winter snow plowing, Cella said.

“We have an opportunity here to continue to preserve it and keep it nice, so that’s what we’re going to do,” he said.

Both statues are expected to be on display by Opening Day 2015. The Harry Caray statue will return to the Budweiser Bleacher entrance, and the Ernie Banks piece will find a temporary home until an open-air plaza west of the ballpark is completed in 2016.

The Cubs and Wrigley Field are 95 percent owned by a trust established for the benefit of the family of Joe Ricketts, owner and CEO of DNAinfo.com. Joe Ricketts has no direct involvement in the management of the iconic team.