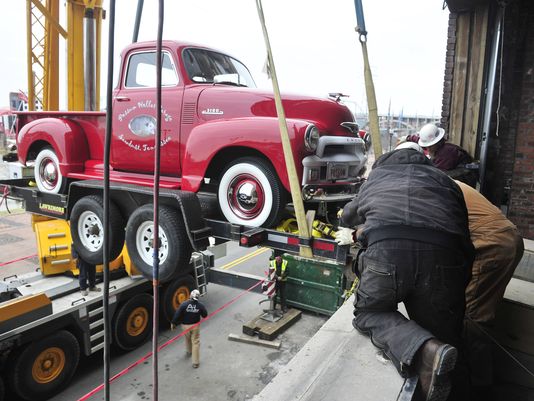 The George Jones Museum won’t open for two more months, but its biggest display is already in place.

On Tuesday morning, a crane and team of workers guided a bright red 1954 Chevrolet pickup truck into a “Window Up Above” First Avenue overlooking the Cumberland River. With its custom “POSSUM” license plate and paint job, there’s no question that the truck belonged to the country legend, who died in 2013.

The museum (at 128 Second Ave. N.) is slated to open the weekend of April 24. The 44,000-square-foot facility will include a restaurant, rooftop bar, event space and gift shop in addition to a number of exhibits that tell the story of Jones’ life and career.

As the George Jones Museum gets closer to opening, the beloved singer’s truck was lifted through a second floor window into the museum. Samuel M. Simpkins / The Tennessean