A Holiday Lift in Philadelphia 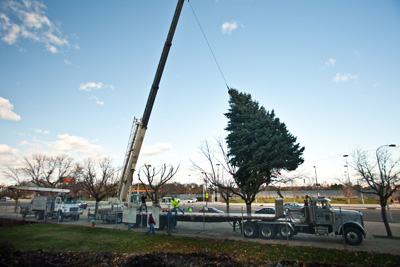 Sautter CraneÂ once again lent its services to assist theÂ City of PhiladelphiaÂ in setting up the municipalityâ€™s official Christmas tree in front of City Hall. The Colorado blue spruce was spared when the rest of the landscaping was removed from the Spectrum in advance of the November 23rd wrecking ball ceremony.

Fairmount Park employees placed straps in the tree and connected it to Sautter Craneâ€™s 60-ton Tyrex T-560, which prevented the tree from falling when it was cut. 60 MPH wind gusts contributed to the excitement of loading the tree on a flat bed for its ride up Broad Street where it was installed at the Dilworth Plaza on the west side of City Hall.

A Holiday Lift in Philadelphia was last modified: November 11th, 2013 by Ron Selby

A construction worker has been killed at Laing Oâ€™Rourkeâ€™s Francis Crick Institute site in Kingâ€™s Cross.