A Crane and a Pumpkin…How Fun (Video) 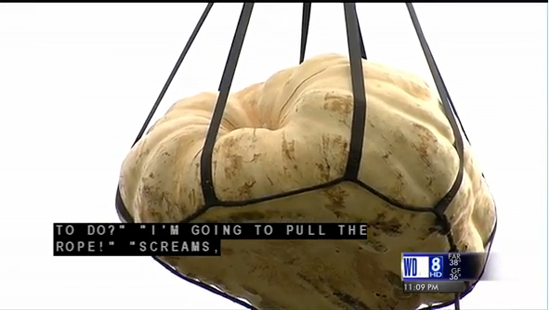 Ottertail, MN (WDAY TV) – A new event made for a smashing time at the Ottertail Pumpkin Festival this afternoon. 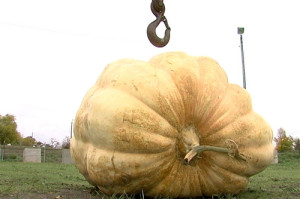 For the first time, they dropped a 1,000-pound pumpkin from a height of 70 feet.

All that work raising it in the patch, gone in a burst of orange.

It starts as just a tiny seed. But with a little love, it can grow into this.

Joe Werner has been growing giant pumpkins for three years.

This one weighs in at a whopping 1,031 pounds, and after just a few months of life, it’s about to meet an explosive end.

Werner is giving up this pumpkin for the Ottertail Pumpkin Festival’s first ever-pumpkin drop.

Werner: “It should throw chunks of pumpkin a ways. It should make a nice thud.”

A 100-foot crane stands at the read. Organizers chose a special guest to do the honors.

“What are you about to do?”

With a burst of seeds, the existence of this giant pumpkin endsâ€¦

But with kids snatching up as many seeds as possible out of the messy, sticky piÃ±ata, it’s a chance for new pumpkins to grow in its place.

Werner holds the Minnesota record with a pumpkin weighing 1,700 pounds.

Of course, he chose not to smash that one.

A Crane and a Pumpkin…How Fun (Video) was last modified: October 20th, 2013 by Ron Selby

Crane tilted across road in mishap