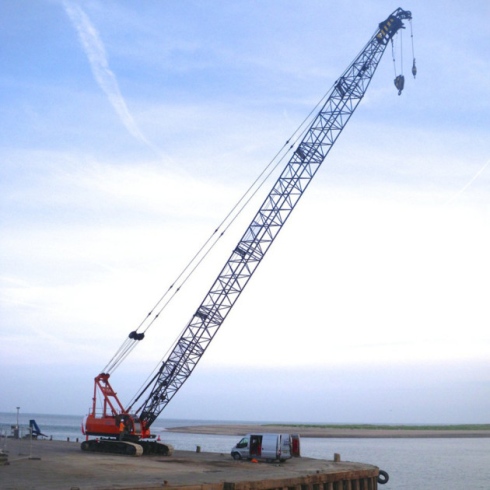 An 80-tonne crane is currently towering over Exmouthâ€™s Pierhead, as part of major construction work on the seawall.

The scheme to replace a section of the wall is set to cost nearly Â£1million, and has been commissioned by developer Eagle One Homes as part of its adjacent five-storey housing development.

During six weeks of work, nearly 400 tonnes of new steel piling will be lifted into place by Teignmouth Maritime Services to reinforce the Pierhead.

Eagle One director Chris Fayers said: â€œThis is the start of work to create a superb new development at Pierhead of 14 contemporary homes with waterfront views.

â€œWe are making a substantial investment to ensure that the sea wall is in good condition and will continue to protect the marina for future generations.â€

Paul Hunt, project manager of Teignmouth Maritime Services, said a vibration piling process would be used to reduce disturbance to neighbours, but there would be some noise as the work is substantial.

Once the piling work is complete, the car park will be resurfaced.

The 80 tonne crane which has started work on the seawall at Pierhead.