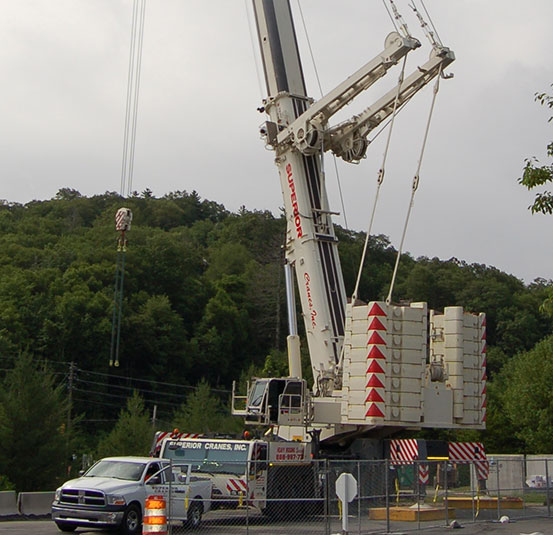 One of the largest cranes in the Carolinas is at work on the sinkhole in the parking lot of Tanger Outlet Shoppes on the Parkway in Blowing Rock.
Superior Cranes, Inc. of Rockingham, NC, brought the crane to Blowing Rock last week, in pieces on five tractor trailers. The crane is Superior Cranes’ 600-ton Demag AC500-2, an all-terrain crane that features a main boom that is 183-feet tall, and an extension jib that is 295-feet tall, for a total capable height of 478 feet. A crew of three men operate the crane.
According to Superior Cranes official Joe Parsons, the crane will be in operation in Blowing Rock through Wednesday, July 2.
The sinkhole appeared in the Tanger parking lot on June 17, 2013 after several days of heavy rain.
For more information on the giant crane, pick up a copy of this week’s edition of The Blowing Rocket.

The 600-ton crane at work in the parking lot of Tanger Shoppes on the Parkway is one of the largest in the Carolinas. Photo by Jeff Eason

Terex Demag CC 6800 moving in at the new Vikings stadium