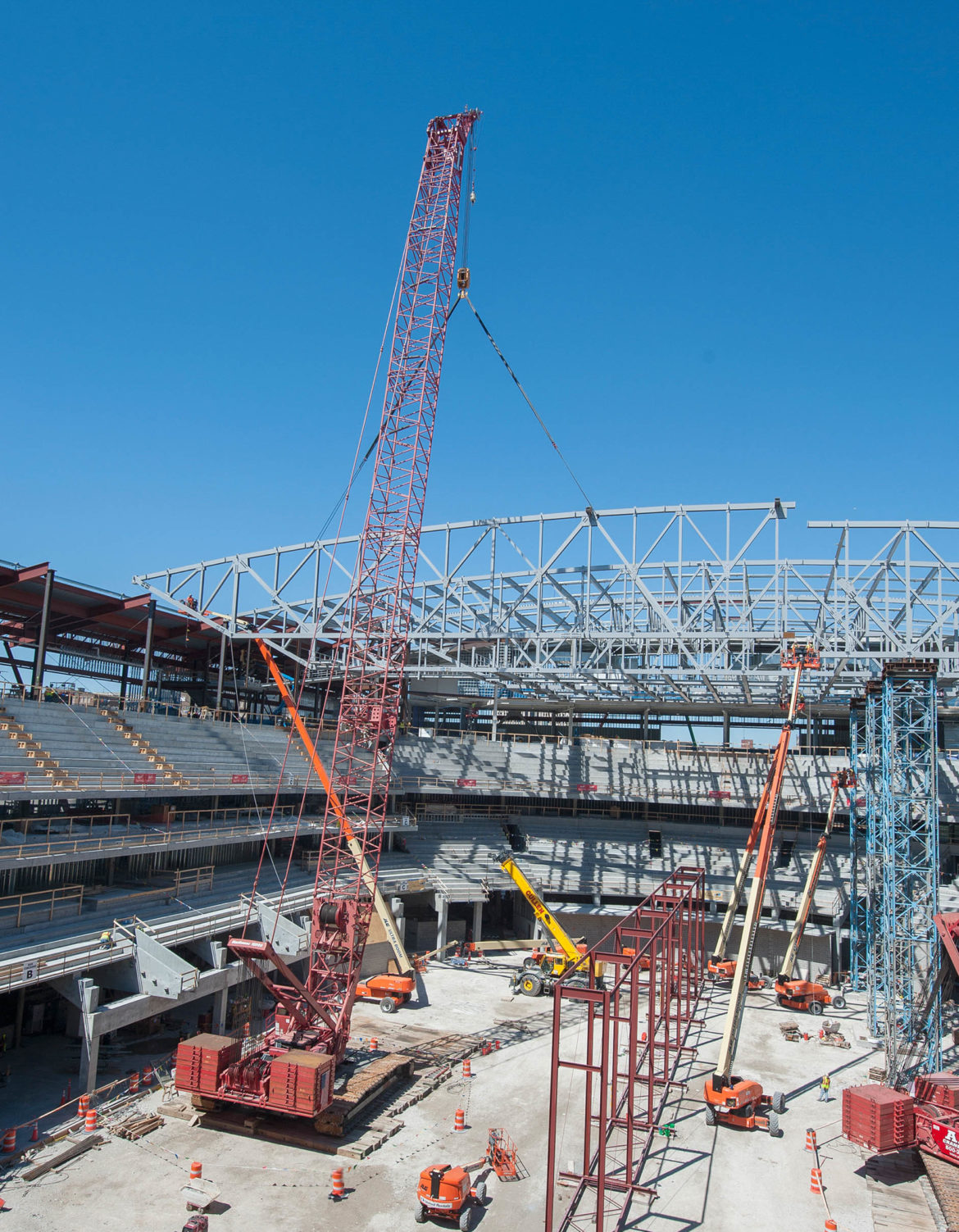 Construction of a new $524 million, multi-purpose arena is underway in downtown Milwaukee, and a fleet of Manitowoc crawler cranes is handling its most crucial lifting work. Dubbed the Wisconsin Entertainment and Sports Center, the arena will replace the aging Bradley Center and serve as the new home of the Milwaukee Bucks.

Mortenson Construction is managing the lifting plans on the job, and the company has employed a number of Manitowoc crawler cranes since construction started in November 2016. Two Manitowoc 999s were used in March to lift all of the arena’s structural steel segments, with the heaviest being a 6-ton cantilever beam that was lifted to a height of 125 ft.

In May, Dawes Rigging & Crane Rental, a member of the ALL Family of Companies, provided two 440-ton Manitowoc 16000 crawler cranes. They were configured with 244 feet of boom to lift 60-ton roof trusses to a height of 125 ft.

Brennan Seeliger, product manager for crawler cranes at Manitowoc, said that the 16000s used for this job were set up with an extended upper boom point, a configuration typically reserved for building wind turbines.

“Generally, crane operators will use this configuration to achieve added clearance between the boom system and the lifted load when lifting at a high boom angle,” he explained. “It’s not common outside of wind applications, but contractors in certain pockets, such as stadium construction, have found a use for it. It often results in fewer necessary components and quicker assembly times.”

Operators also used a Manitowoc 14000 provided by Dawes to lift 20.5-ton precast segments. All three cranes worked in close proximity at the center of the arena and had to work in shifts as a result — the dual 16000s lifted trusses daily until 4 p.m., then the 14000 took over.

“The main challenges on this job were the tight project site and, more specifically, the confined space in the arena’s center, so identifying the right cranes for the project was critical,” he said. “A significant amount of coordination was involved since we couldn’t run all of the cranes at the same time. Plus, we had to assemble all roof truss components on the ground before lifting. We needed cranes that could deliver the necessary capacity and mobility to execute our lift plans, and these Manitowoc crawlers did not disappoint.”

Dawes Crane & Rigging rented the cranes to Schofield, Wisconsin-based Merrill Iron & Steel and Janesville, Wisconsin-based JP Cullen, the contractors working on the roof truss installation, which finished in June. Construction of the Wisconsin Entertainment and Sports Center is due to be completed in 2018.

Terex and Demag on I-4 Ultimate project