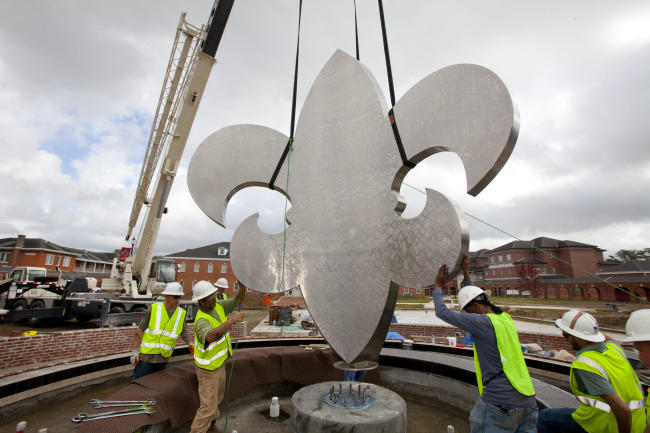 A large, metal fleur-de-lis sculpture was installed Wednesday in the UL Lafayette Quadrangle, the centerpiece of a water fountain and plaza being constructed as part of a student-designed makeover to the Quad.

The three-sided fleur-de-lis, which weighs about 3,000 pounds and is about 14 feet tall, was mounted atop a 4-foot concrete base inside the fountain.

The sculpture stands as â€œa symbol, an icon of the University,â€ said Tom Sammons, director of the School of Architecture and Design.

More than 100 UL Lafayette students worked on the fleur-de-lis over about five years, including architectural students who designed various aspects of the project as part of a Community Design Workshop group led by Sammons.

One of those students is Todd St. Julien, who earned a masterâ€™s degree in architecture and design from the University of Louisiana at Lafayette. St. Julien is an architect with Trahan Architecture + Planning, a firm in Lafayette

â€œIt was a true collaborative process, and itâ€™s great to see the work of so many students come to life,â€ St. Julien said at the installation Wednesday.

The stainless steel fleur-de-lis was shaped and constructed by Begneaud Manufacturing of Scott. It was transported to the University early Wednesday morning, and lowered into place by a 40-ton crane.

The fleur-de-lis sculpture isnâ€™t the only feature that will make the fountain stand out, according to Scott Hebert, a civil engineer with Garden City Construction in Lafayette.

Hebert, who earned his bachelorâ€™s degree at UL Lafayette, said the fountain will be equipped with LED lighting that can be programmed to change colors, and light up the entire area at night.

â€œIt will be a two-tiered fountain. Water will flow from the top tier, which the sculpture sits in, to the bottom tier, creating a waterfall effect,â€ Hebert said at the installation Wednesday.

Renovations to the Quad also include a plaza, new walkways and landscaping with crepe myrtles and magnolias.

â€œThe Quad is the Universityâ€™s living room, a public space surrounded by its first buildings. When people come to see the campus and these beautiful red buildings trimmed in white, they will also see a beautiful Quad,â€ Sammons said.

UL Lafayetteâ€™s Student Government Association spearheaded the Quad redesign in 2010. The project is the first major Master Plan project to be paid for with self-assessed student fees.

The Master Plan will guide campus growth, development and change over the next 15-20 years.