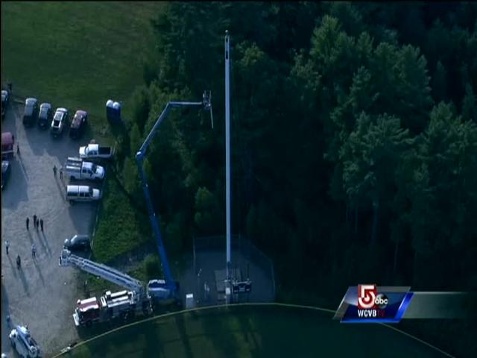 KINGSTON, Mass. â€”Two people were injured and became stuck on a crane boom in Kingston Monday evening, according to emergency officials.

Shortly after 5 p.m., the lift the two men were on malfunctioned, and they went tumbling inside the cage.

“(The crane) dropped about 30 feet before it stopped,” Fire Capt. Adam Hatch said.

The two men were doing maintenance on the cell tower when they ended up stuck in the air.

“He fell inside the cage,” witness Jim Cleaves said. “If he didn’t have his harness on, they would have fell out.”

Youth football players and their families on a nearby field saw the incident occur and called 911.

The workers were eventually rescued and brought to a local hospital to be treated for minor injuries.