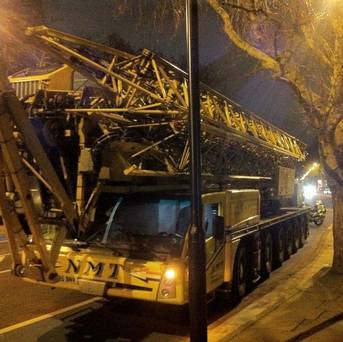 No one can escape the long arm of the law, not even the driver of a mobile crane worth almost Â£1 million.

The monster 72-ton lifter is among 100,000 uninsured vehicles which have been seized by the Metropolitan Police in Operation Cubo, a clampdown on illegal driving in London.

The haul includes luxury cars such as Bentleys, Aston Martins, Porsches and Lamborghinis.

Scotland Yard said the huge construction crane was stopped in upmarket Belgravia in January 2012 because its driver was unlicensed and uninsured.

The force said it is the most expensive single vehicle taken by the operation since it launched in October 2011.

As well as the crane, police said they also took two Lamborghini Aventadors worth a combined Â£700,000 in the clampdown. The supercars do 0-62mph in 2.9 seconds and have a top speed of 217mph.

Other cars confiscated include a McLaren sportscar and a posh Bentley Turbo – R saloon.

Drivers found to have been on the road illegally face potentially having their prized wheels crushed.