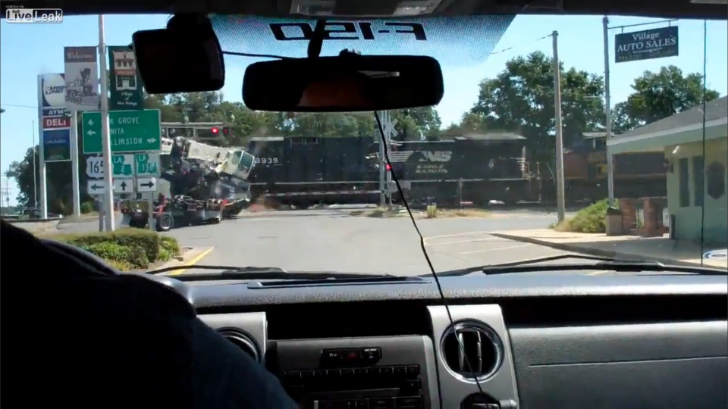 This is one of those videos that makes Hollywood movies seem like they might actually be real. In a terrible twist of fate, an 18 wheeler carrying a crane bottomed out and got stuck on top of a railroad crossing in Mer Rouge, Louisiana on Sunday.

VIDEO HERE
The video below captures the exact moment when the two meet in what can only be accurately described by the comments of the woman who was filming: â€˜Holy Moo-Moo!â€™. Divinity had to be invoked.

After the crash, the trailer was absolutely obliterated as well as the crane and the locomotive. Fortunately, the driver of the trailer managed to get out in the nick of time, avoiding serious injury. Hazmat crews were immediately called to the scene as the chemicals were leaking out of the train cars.

Tragically, the engineer and and conductor were hurt in the unfortunate accident as the train couldnâ€™t be stopped in time. Both of them were airlifted to the nearest hospitals and are now in capable hands but not yet out of harms way.

According to the Chief of Police in the little Louisiana town, such incidents arenâ€™t rare over there:

“This is Mer Rouge, were pretty much known here for our train crashes. I believe this will be the third of fourth one in the past two years,” said Chief of Police Mitch Stephens. “By far this is the worst one I have seen here.â€

â€œHe tried everything he could to get off the crossing and the next thing you know we have a north bound train that could not stop in time,” added Stephens.

Following the crash and due to the leaking argon, the authorities cleared all the houses within a half mile radius to make sure nobody got hurt