Two Injured, Lanes Closed On 405 Due To Fallen Construction Beam 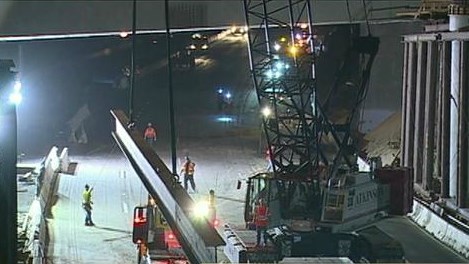 Seal Beach, CA -Â (FOX 11 / CNS) All lanes of the San Diego (405) Freeway were closed down in Seal Beach this morning after a steel beam fell from a construction site in a mishap that left two workers hurt, authorities said.

The accident was reported around 2:45 a.m., according to Caltrans, and a SigAlert for northbound and southbound lanes was declared at 4:15 a.m.The beam fell from the site of a new connector between the San Gabriel River (605) Freeway and the 405.

Orange County Fire Authority Capt. Steve Concialdi said two people were transported to a hospital in moderate condition. One victim, a man in his 50s, suffered head and leg injuries after falling 25 feet, Concialdi said. The worker had been on the beam when it fell and he landed on the road, away from it, a Caltrans spokesman told news media outlets.

The second worker, aged 46, suffered abdominal and chest injuries as a result of being struck several times in the upper torso by the beam, Concialdi said.

The beam was about 140 feet long and weighed 60,000 pounds, according to Caltrans. What caused it to fall was not immediately clear.

The 405 freeway in northwestern Orange County was shutdown in both directions early Wednesday after three, 130-foot steel beams toppled from a CALTRANS construction site. A construction worker was hurt after he fell onto the freeway.

The accident happened around 2:45 a.m. as crews were setting three 50,000 pound beams onto a new overpass just east of Long Beach. One beam on a crane fell and knocked down two others. All three crashed down onto the southbound lanes of I-405.

One worker fell about 25 feet from the overpass onto the pavement below. He was transported to a Long Beach memorial with a leg injury. A second worker was left hanging but managed to climb back up.

Traffic was backed up for several miles in both directions, as crews worked go remove the beams. The NB 405 was reopened just before 7 a.m. CALTRANS officials say the SB 405 should reopen by 8 a.m.