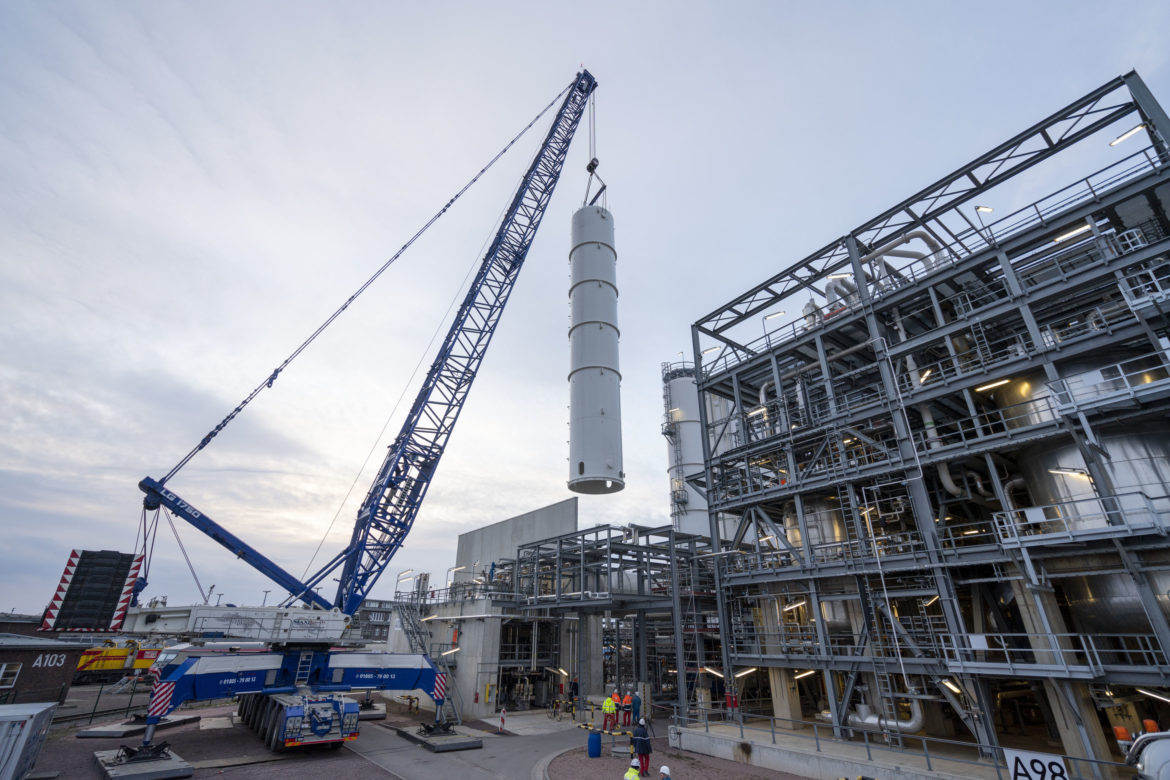 Three large Liebherr mobile cranes were sent by crane and heavy haulage logistics contractor Maxikraft, which mainly operates in the east of Germany, to complete a tricky job at a chemical plant near Halle (Saale) – a storage tank weighing over 100 tonnes had to be transported from its assembly area through the factory site to its destination and then installed in the plant. The route through the factory site was blocked by a large pipe bridge.

Three large cranes from the Maxikraft Group were used for this extraordinary crane job at Schkopau near Halle in Saxony-Anhalt.  A storage tank weighing 108 tonnes and measuring 33 metres in length had to be transported a distance of around one kilometre through the chemical plant and also had to be hoisted over a twelve metre high pipe bridge. Two Liebherr mobile cranes, an LTM 1500-8.1 and an LTM 1750-9.1, positioned on both sides of the pipes, managed to complete the job with ease. After the steel tank had previously been moved on a temporary site road, the awkward load was lifted off a low loader by two mobile cranes and carefully hoisted over the obstacle.

A Liebherr LG 1750 lattice boom mobile crane was already waiting at the destination. Together with the LTM 1500-8.1, the storage tank was moved to the vertical and then hoisted by the large crane into the plant over a 16 metre concrete wall to its final installation location. The powerful crane was fitted with a 70 metre main boom for this job, which required a radius of 30 metres. Due to the constricted space, the LG 1750 could only be set up with a small support base measuring 12 x 12 metres. The crane was fitted with the optional slewing platform extension to ensure that the gross load of 115 tonnes could nevertheless be managed at this radius. This increased the ballast radius by 2.5 metres and raised the crane’s lifting capacity values.

“This job was a welcome change to our everyday working lives,” said Volker Weber in satisfaction at a challenging job well done, which the efforts of required 30 personnel. Weber is the manager of the Maximum outlet in Schkopau, and was responsible for preparing and planning the tank installation. Since his outlet only has six small mobile cranes available, support is requested when required from the Group, which has access to an impressive fleet numbering almost 180 cranes. Around 90 percent of them bear the Liebherr name.