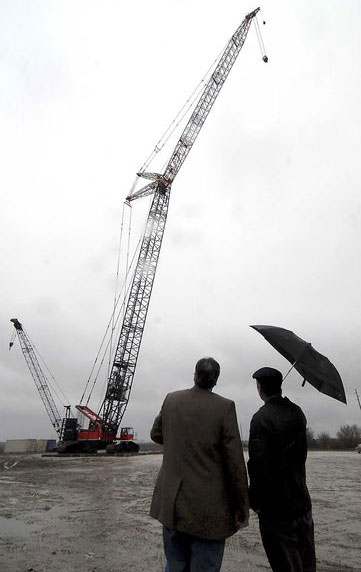 Anyone seeking the location of a Wednesday afternoon open house hosted by one of the newest businesses in Fort Dodge needed only to look up to see a towering machine marking the spot.

A huge crane capable of lifting 400 tons was set up outside the local office of Texas-based TNT Crane & Rigging near the intersection of Kenyon Road and U.S. Highway 169. Company managers said seven cranes of varying sizes will be stationed there.

“We’re thrilled to be here,” Todd Quattlebaum, the company’s general manager, said during a ribbon-cutting ceremony conducted by the Greater Fort Dodge Growth Alliance. “We actually start to work next week.”

Theo Jones, the local operations manager for TNT Crane & Rigging, said the company will be in Fort Dodge for a long time.

“This is permanent,” he said. “We’re going to be a part of the community.”

Quattlebaum said the opportunity to work with the growing wind energy industry in the Midwest prompted the company to open its 11-acre location at 2125 Lainson Ave.

Johnson said the company specializes in lifting gear boxes, generators and “anything that needs to be exchanged on a wind turbine.”

According to Quattlebaum, the personnel and equipment based locally will work in a 250 mile radius of Fort Dodge, including parts of Minnesota, Nebraska and South Dakota.

“We’re going to have a pretty big footprint served from Fort Dodge,” he said.

Initially, there will be 20 people working in Fort Dodge. Quattlebaum said he expects that number to double by next spring. He added that the company is trying to hire mostly local people.

Those employees will work with seven cranes. One of them, called a Liebherr LR 1350, was set up outside the company’s building Wednesday. That machine cost about $5 million, Quattlebaum said.

An even larger crane is scheduled to arrive next week, he added. He said 20 to 30 truck loads of crane parts will be delivered.

TNT Crane & Rigging was established in 1985. It also has locations in Florida, Georgia, Louisiana, Oklahoma, South Carolina, Tennessee and Texas. It has more than 1,100 employees and about 470 cranes.

The company announced in March that would open a Fort Dodge location.

By BILL SHEA ([email protected])
There’s a new crane in town TNT shows its stuff in Fort Dodge was last modified: May 1st, 2014 by Ron Selby